Pooper:
Although the souls of Lucie and Anna are swapped, the two girls join forces to kill Jessel and Catherine. The pair then leave the home to experience lives in their new bodies.

Long Ending:
Lucie (Chloé Coulloud) gets a job as an in-home nursing assistant. She shadows her boss Catherine (Catherine Jacob) throughout the day. Eventually, Lucie is taken to the home of an extremely wealthy woman named Jessel (Marie-Claude Pietragalla). Jessel was a renowned ballet teacher but now is bedridden in a coma. Additionally, Jessel had a daughter who died young, leaving the old woman all alone. Catherine mentions a rumor that a large treasure is hidden somewhere in Jessel’s mansion.

Lucie tells her boyfriend, an ex-convict named William (Félix Moati), about Jessel’s treasure. William and his best friend Ben (Jérémy Kapone) want to break in and take the treasure. Lucie initially opposes their plan, but eventually agrees to accompany them so long as they steal only what they need to get a better life. The trio sets off on Halloween night and breaks into the mansion.

The home is filled with taxidermied animals and creepy animatronics. Eventually, they find the taxidermied body of a teenaged girl that Lucie deduces is Jessel’s daughter Anna (Chloé Marcq). The body of Anna has been modified to dance like a ballerina when the machine it’s suspended in is activated. As the three stare at the grotesque body of Anna, they hear Jessel wake up and all doorways and windows slam shut and lock. It is clear that there are supernatural goings-on. As the trio try to find a way to escape, Ben is teleported to a secret laboratory where mini ballerinas slit his throat. William is later attacked by Ben’s corpse and killed when Jessel appears, rips off his scalp, and drinks his blood.

Jessel gives Lucie a vision of the past, wherein Lucie learns that Jessel and Anna are a type of vampire and that Jessel kept Anna trapped in the house. Lucie flees back to the room where Anna’s body is and realizes that Anna is still alive (though incapacitated). Anna gives Lucie a vision of the past, wherein Lucie sees that Jessel abused Anna in an effort to make Anna a great dancer. Jessel accidentally breaks Anna’s back during a dance session. One of Jessel’s other dance students revealed to be Catherine, assisted Jessel in turning Anna’s body into a living doll. After the vision ends, Lucie is attacked and knocked out by Catherine. It turns out that Catherine still works for Jessel, supplying the vampire with blood and luring unsuspecting people into the mansion.

Lucie awakens strapped to an operating table in the secret laboratory next to Anna’s body. Jessel and Catherine perform a ritual that transfers Anna’s soul into Lucie’s healthy human body and transfers Lucie’s soul into Anna’s broken vampire body. With her daughter “back,” Jessel demands that Anna dance for her. Instead, Anna kills Catherine and knocks out Jessel. She then goes to the laboratory and lets Lucie drink some of her blood. The two girls prepare to leave but are attacked by a resuscitated Jessel. After a heated battle, they manage to throw Jessel over a railing where she falls several floors to her death. The survivors open the front door, only to find that the house is in Limbo.

When daylight comes, the house returns to the Earthly plane, and the girls exit. They walk to a cliffside overlooking the sea. Anna is finally able to leave her home and lead a normal life in Lucie’s human body. Meanwhile Lucie, in Anna’s supernatural body, reveals her body to the sun. Instead of destroying Lucie, the sun causes her to float into the air and she begins flying across the ocean. 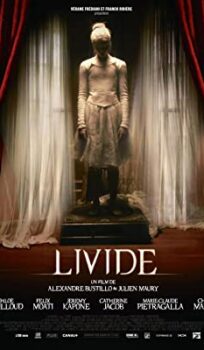