Knox petroleum sends Mac (Peter Riegert) to Scotland to buy a village to use as a refinery. He is chosen because of the incorrect assumption that he is Scottish. He gets there and forgets all he previously thought to be important. A hitch in the sale is averted when Happer (Burt Lancaster), the Knox owner, arrives. In the end it’s decided to build a marine institute, not the refinery as planned. Is Ben Knox (Fulton Mackay), the beach dweller that owns the entire beach, related to the Knox’s of Knox petroleum? And why did Mac go home? 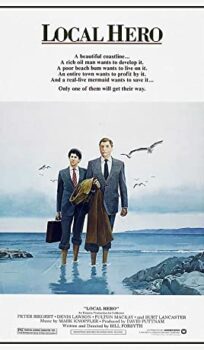