Like in the 1963 version, all boys -except for Ralph (Balthazar Getty) and Piggy (Danuel Pipoly), guided by Jack (Chris Furrh), degenerate into a savagery state.  Ralph tries to get Piggy’s glasses back from the rogue group at Castle Rock, and Piggy -who is all but blind without his glasses- tries to use the conch once more and talk sense into everyone.  Undeterred, two of the boys from atop toss a massive boulder onto Piggy, which, at the helpless sight of Ralph, cracks his skull and kills him instantly.  Ralph warns Jack “he won’t get away with it” and, immediately, they all jeer at Jack and drive him away.  Later that night, Jack reacquaints with the twins Sam and Eric (Andrew and Edward Taft), who, despite being part of the rogues, were still somewhat loyal to Ralph; they warn him Jack and the hunters will hunt him down, in retaliation.

Next morning, Ralph awakes to the whole place set ablaze, in an obvious effort to drive him out of hiding and kill him.  After being spotted by one of the hunters who yells at Jack, a chase ensues.  Ralph makes a run for his life towards the beach; he collapses at the feet of a Marine Officer (Bob Peck) that deployed at the island with a contingent of soldiers after noticing the fire from afar.  The rest of the boys follow close and come to a dead silent stop, visibly terrified -implying that, once it is known what happened, they will all face a certain harsh punishment-.  The Officer, surprised, asks “What are you guys doing?!” and Ralph breaks down, sobbing. 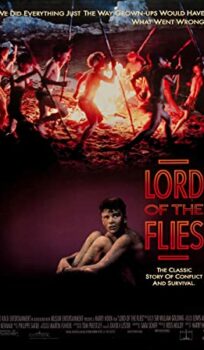