Lord of the Rings: The Return of the King

At the outset, things don’t look so well for Men, as the armies of Mordor lay siege to Gondor. Denethor (John Noble) refuses to call to Rohan for aid, but Gandalf (Ian McKellen) convinces Pippin (Billy Boyd) to sneak up and light the beacon summoning the Rohirrim. In Rohan, Theoden’s (Bernard Hill’s) army prepares to move out, but Elrond (Hugo Weaving) appears with a re-forged sword of Isildur, and tells Aragorn (Viggo Mortensen) to take an alternate route, through the paths of the dead, hoping that the ghosts of the mountain will revive their allegiance to the King. Gimli (John Rhys-Davies) and Legolas (Orlando Bloom) ride off with Aragorn.

Theoden attempts to leave his niece Eowyn (Miranda Otto) behind and in charge of her people, but she sneaks into armor, grabs Merry (Dominic Monaghan) and heads to battle with the men. Back at Minas Tirith, a quite insane Denethor sacrifices most of his army in a futile attempt to regain Osgilliath. Denethor starts a funeral pyre for a still-breathing Faramir (David Wenham), but Pippin rescues the captain. Denethor manages to ignite himself, and falls, flaming, from the peak of the city as the battle wages. The riders of Rohan arrive, and engage in battle. Theoden is mortally woundedby the Lord of the Nazgul (Lawrence Makoare). As the Nazgul prepares to finish Theoden, Eowyn appears, decapitates the the Black Rider’s dragon-like mount, and then kills the Nazgul himself. Aragorn, Gimli and Legolas arrive at the head of an army of the dead, which lays waste to the remnants of the attackers from Mordor. Realizing that Sauron has not yet obtained the Ring, Aragorn proposes an obviously futile assault on the Black Gate as a way to divert Sauron’s attention from Frodo (Elijah Wood) and Sam (Sean Astin).

Frodo and Sam, meanwhile, have made it to Mount Doom, but the power of the Ring overwhelms Frodo, and he is unable to destroy it. Luckily for all, Gollum (Andy Serkis) is also possessed by the Ring, and his desire drives him to attack Frodo. He bites off Frodo’s finger and obtains the Ring, but in a struggle over the Ring, Gollum falls into the volcano. The Ring is destroyed, Sauron’s power dissolves, and Men win the War. Aragorn is crowned king of Gondor, and discovers that Arwen (Liv Tyler) has not gone over the sea, but will remain and be his queen. Faramir and Eowyn stand together, implying if not a romantic hook-up, at least a firmer allegiance between the lands of Gondor and Rohan. Upon returning to the Shire (no scouring here) Sam marries Rosie (Sarah McLeod). Bilbo (Ian Holm) is given a seat on the last Elven ship across the sea, and he, Gandalf and Frodo sail away. Whew! 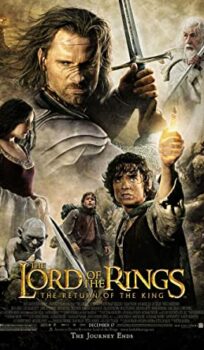