Short Ending:
Lorna manages to escape from Fabio’s henchman and flees into the woods. She eventually finds a cabin deep in the woods and manages to build a fire. As she goes to sleep, she promises to protect her imaginary child from harm, and in doing so, will keep herself alive.

Long Ending:
In this film by the Dardenne Brothers, Lorna (Arta Dobroshi) is a ntive Albanian who lives with her Belgian husband Claudy (Jérémie Renier) in Belgium. As it turns out, however, the marriage is a sham. Enterprising cab driver Fabio (Fabrizio Rongione) has set up the following deal. Lorna, via marriage to Claudy, will attain her Belgian citizenship and has been able to work and save a considerable sum of money. Claudy, a drug addict, gets a huge payment for remaining married to her, and will get a bigger payment when he and Lorna divorce. After the divorce, Lorna will marry a Russian named Andrei (another client procured by Fabio) so that he may also get Belgian citizenship (and Andrei is apparently paying a huge sum to both Fabio and Lorna for this sham marriage). Then, Andrei and Lorna will divorce, and she and her actual boyfriend and fellow native Albanian Sokol (Alban Ukaj) can use the money the two have earned to take a vacation in Italy and then open a snack shop in Belgium. Since Fabio has a lot invested in the plan, he follows Lorna closely and checks on her every day. Also, unbeknownst to Claudy, Lorna and Fabio intend to kill him by forcing him to overdose – as Fabio says Claudy’s death will be less likely to attract immigration/police attention than an actual divorce. Lorna and Sokol both completely approve of all aspects of this plan.

Claudy, however, is completely clueless of the fate Fabio and co. have in store for him. With Lorna living with him, he begins to seriously attempt to kick his drug habit. Initially, Claudy threatens to expose their sham marriage and/or refuse to sign divorce papers if Lorna doesn’t support him through his withdrawal. As she begins helping him, she begins to admire his resolve to truly change his life and redeem himself and voluntarily assists him in overcoming his drug habit. She pleads with Fabio and Sokol to postpone her marriage to Andrei and spare Claudy’s life, saying she will fake domestic abuse to ensure a divorce. Although both men are skeptical of this plan, Sokol defers to Fabio, and Fabio says that he has convinced Andrei to wait until the divorce to begin the second phase of their plan. Lorna is thrilled that she has saved Claudy’s life, even though Claudy is wholly unaware that he was ever in danger, and returns to his apartment. She finds him with his drug dealer, attempting to make a deal and break his hard-won sobriety, mistakenly assuming that Lorna had left him for good. Lorna forcibly kicks the dealer out of their home, and in a moment of utter compassion for Claudy, the two share a one-time night of passionate sex.

We skip ahead a bit and Lorna is finally awarded her divorce. Yet, to her horror, the doctors call and say that Claudy was found dead of an accidental drug overdose, and had left everything to her. Lorna confronts Fabio, and he admits that he arranged Claudy’s death and had lied to Lorna, Andrei never agreed to push back the wedding. Fabio says he lied to Lorna because he knew she would try to save Claudy if she thought he was going to die, which would jeopardize their entire plan. He offers her an extra $1,000 for her trouble in getting the divorce and dealing with Claudy’s addiction, but she rejects it. Lorna attempts to contact Claudy’s family and give them his belongings, but they completely reject her offers. Eventually, Sokol comes to town and he apparently cheers Lorna up. She even accepts the $1,000 from Fabio.

Lorna finally buys a place for she and Sokol to set up their snack shop, but then suffers from sharp abdominal pains while walking through it. We skip ahead to find her in an abortion clinic, where she claims she is pregnant with Claudy’s child. The clinic doesn’t examine her, but says there is a mandatory 8-day waiting period after initial consultation before she can terminate the pregnancy. She ultimately chooses not to terminate, and even opens a bank account for the unborn child under Claudy’s surname. On the eve of her first meeting with Andrei, she tells Fabio that she is pregnant. He is incensed and says she better not tip Andrei off, even forcing her to drink beer in front of Andrei. After the meeting, Fabio orders Lorna to abort the child before she meets with Andrei again. Lorna disobeys him and when she and Andrei meet, she asks if it is ok if she keeps the baby, upsetting Andrei immensely. Andrei refuses to marry her if she is pregnant, and Fabio arranges to have Lorna checked out by Andrei’s doctor before the deal is finalized. Lorna again refuses to terminate, and faints during an argument with Fabio.

She awakens in the hospital and confesses to Fabio that the baby’s father is Claudy. Fabio tells her that she is completely insane. A nurse walks into the room and checks to make sure that Lorna is sedated to a calm state. The nurse then proceeds to explain to Lorna that she is not, and never was, pregnant. Lorna refuses to believe this, and the deal with Andrei is completely scuttled. Sokol and Fabio raid Lorna’s bank account and arrange to have her sent back to Albania. Sokol promises to visit, but is clearly upset that Lorna lied to them and slept with Claudy.

Fabio’s henchman is ordered to drive Lorna to the airport, but he acts very suspiciously on the drive. Lorna presumes that Fabio has ordered his henchman to kill her, and so she tricks him into pulling over and knocks him unconscious. Lorna then flees into some neighboring woods, talking to her imaginary baby the whole time (the Dardennes, who wrote and directed this film, have confirmed that the baby never existed, but that Lorna was feeling a physical manifestation of the guilt for what she caused to happen to Claudy). The film ends with Lorna finding a seemingly abandoned cabin and breaking into it for shelter. As she falls asleep she promises to protect the baby, a mission she was unable to accomplish with Claudy. The film ends with her sleeping in the cabin, her ultimate fate undetermined. 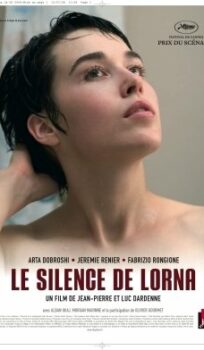