Carl (a cop) finds half of a treasure map, brings it to his brother Bryan (Stephen Baldwin) (who works at the DOD and just happens to dabble in treasure hunting when he’s bored).

Carl’s partner gets shot and dies, while another cop, Walker (Jerry Doyle) is a bad guy in cop’s clothing.  Carl is kidnapped and Bryan follows him.  The map shows where to find a bunch of gold Columbus hid before his ship sank.  Carl is about to be shot so he tricks the kidnappers with a piece of gold he stole from his brother’s collection.

Bryan hops on a plane (piloted by Nicollette Sheridan, along with 2 annoying tourists) and it crashes on the island.  Carl escapes from the kidnappers.  All the bad guys get killed (by Bryan, double-crosses, and a tsunami), the good guys get hold of the 1st half of the map and get to higher ground to get out of the tsunami.  Bryan had the 2nd half of the map in the lining of his coat the whole time.

They find the treasure.  Bryan and the pilot smooch. 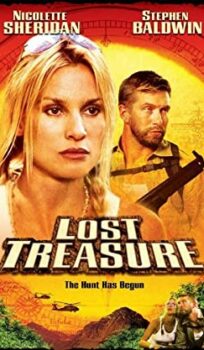