Simon is a well-adjusted closeted gay teenager. Under the name “Blue”, a classmate anonymously posts about being gay on a school gossip site. Under a pseudonym, Simon begins corresponding with Blue. He has a few suspects as to who Blue could be: his friend Bram, Waffle House waiter Lyle, or drama club pianist Cal.

After embarrassing himself in front of the entire school at a homecoming football game by declaring his (unrequited) love for Abby, Martin – who had been blackmailing Simon – releases emails between Simon and Blue on the school gossip site.

Blue gets scared and breaks off contact with Simon.

His friends discover the deceptions Simon had perpetuated while being blackmailed. They’re mad at him, but eventually forgive him.

He comes out to his family, who let him know he is loved and deserves love.

Through the school gossip site, Simon declares his love for Blue and let’s him know that if he wants to meet, he will be at the school carnival on the ferris wheel. Just when his friends are sure Simon is about to be stood up, Bram shows up, confessing that he is Blue.

The two ride the ferris wheel together and kiss at the top, to the cheers of their classmates.

Just before graduation, things have returned to normal. Simon and his friends carpool to school, with one new carpool member – Bram – who gets in the passenger seat and kisses Simon. 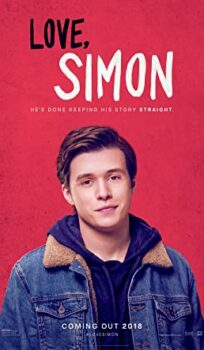