After Seth (French Stewart) breaks his promise to propose after a year, Chelsea (Bridgette Wilson) files a lawsuit, and asks for $500000 in damages, and the two start a “War of the Roses” to get each other out of his house.

Seth loses the war when she gets a restraining order. He then proposes to her, buys a huge wedding ring and arranges a Las Vegas wedding, and sells his house. She then drops the lawsuit.

At the wedding, Seth says “no” because she is evil, and he explains to her that the wedding ring was a fake, and that the house buyer was a fake too, and that all of this was done to get her to drop the lawsuit. She takes the weapon of a security guy, fires at Seth, and hits him in the butt, and gets arrested, still in her white wedding dress. 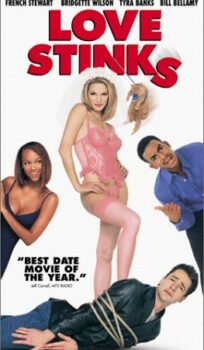