Long story:
The story chronicles the life of Linda Lovelace (Amanda Seyfried), who made a name for herself in the classic adult film “Deep Throat.” Throughout the film, we see how Linda left her home to marry Chuck Traynor (Peter Sarsgaard), who abused her and basically sold her out to the adult film industry because of her talent when it came to oral sex, which is discovered while he plays a home film in front of producers Gerry and Butchie. Anthony Romano (Chris Noth) agrees to produce the film.

The movie is a tremendous success in the adult film world, to the point that Hugh Hefner (James Franco) offers her a private viewing with him. Though Linda shows interest in Hugh, he suggests she go home with her husband.

Linda’s life goes on amidst the chaos of her marriage, but she maintains her loyalty to Chuck on account of the values she was taught by her mother (Sharon Stone). Chuck’s abuse of Linda goes from physical and emotional to sexual and masochistic. He is shown threatening her with violence including a gun. He even sets her up as the girl for a group sex party that he apparently charged an exorbitant amount of money for. 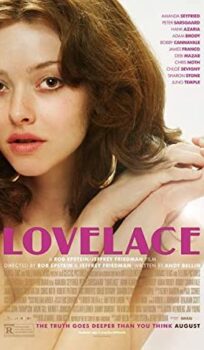