POOPER:
Max and Furiosa drive one way to Furiosa’s homeland, find that it’s gone, turn around and take over the base where they started, after defeating all the bad guys in a crash up derby car chase.

LONG VERSION:
Max (Tom Hardy) is in the desert hallucinating, seeing visions of his dead wife and daughter.  He snaps to reality just in time to realize he’s being chased by Immortan Joe’s (Hugh Keays-Byrne) troops.  He hops in his car and races away, but his pursuers manage to catch him and take him prisoner.

Immortan Joe sends Imperator Furiosa (Charlize Theron) and a convoy to a nearby city for gas.  Max tries to escape again, but is captured again because images of his daughter keep throwing him off his game.

Furiosa has smuggled out a brood of breeders, Immortan Joe’s wives.  She’s taking them to safety where she grew up.  People at the Immortan camp see Furiosa has changed course, so they send out more troops to get her.   One of the troops named Nux (Nicholas Hoult) wants to go, but he’s too weak and sick, so he takes Max as a blood bag to feed him a steady transfusion during the chase.  Max is now strapped to the front of Nux’s car.

Furiosa drives through the forbidden land and into a chasm where she’s made a deal with bandits to let her through.  They’re pissed that she has an army after her so they end up chasing her too.

The chase continues now with the bandits and Immortan Joe’s army pursuing Furiosa.  Everyone drives into a giant sandstorm and pretty much everyone is annihilated.  Afterwards, Max wakes up, face down in the sand.  He’s still chained/transfusion tubed to a passed out Nux.  He sees Furiosa’s nearby Rig and all the ladies bathing in a hose.  He tries to get one of them to free him from Nux, but Furiosa steps in and she and Max get into a big ol’ fight.  Max wins, gets detached from Nux and they all take off together.

Nux stows away on the rig and he and one of the breeders named Capable (Riley Keough) fall for each other.  So he decides to help them out.

Max and the ladies get to Furiosa’s homeland only to find it’s gone.  It’s just a bunch of swamp and a handful of old ladies.  They have enough supplies to take motorcycles and last about 160 days.  Max isn’t going to go with them, but then he sees another vision of his daughter and he realizes that trying to care for people is what’s helped him survive this long.  So he tells the women that they should go back to Joe’s base instead since he has water and plants there.  Also, since they’re being pursued, everyone back at the base is too sick to defend it anyway.

So they double back, but end up in pursuit of Joe again.  There’s another big ol’ car war, and Joe gets his face mask torn off and is killed.  The good guys get back to the base where Furiosa seems to become their new leader. 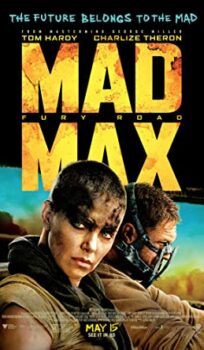