After Bobby (James Daughton) gets into a brief fight with Dugan (Stephen Oliver) at a party over Dina (Kim Lankford) (which gets broken up by the cops Rodney [Parris Clifton Buckner] and Lyle [Bruce Kimball], who have come to shut the party down due to excessive noise), Dina opts to go home by herself and shuns Bobby, telling him that she is tired of winding up in the middle of his fights. However, later that night, she goes to the beach and finds Bobby swimming there to take his mind off things, and they iron out their problems. They then have sex for the first time and keep each other company until dawn.

A day or two later, Bobby and Dina meet up with their friends Paul (Michael Luther) and Sally (Susan Player) at the pier on the beach to have some fun together, but the mood is spoiled when Dugan appears. He challenges Bobby to a fight, but Dina and Sally suggest that they hash it out by having a swimming race instead, starting at the bottom of a set of stairs below the pier and going out to the nearby buoy and back again. Bobby and Dugan agree to this alternative, but as they are getting ready to start, we see Paul donning a diving suit on a small dock on the other side of the pier, and there is a fake shark fin lying next to him.

Dugan swims out and touches the buoy first, but as he returns to the pier, Paul gets Bobby’s attention and shows him the fin strapped to his back. The girls soon notice the fin and warn Dugan about it, frightening him and making him swim like crazy back to the stairs, and he walks back up to the pier and collapses from shock. Paul sneaks back to the dock, gets his gear off, and rejoins the girls, who tell him that there is a shark in the water. However, when they point to the spot where they last saw the fin, Paul notices that there is a REAL shark’s fin out there now. They scream this out to Bobby, who sees it and swims back to the stairs as fast as he can, and he barely manages to get out of the water before the shark chews up the small ladder at the bottom of the stairs.

Dugan walks off sulking over how he won the race but lost the girl, and he finally accepts that he is not a young man anymore. Just then, the schoolteacher Ms. Plickett (Flora Plumb) – whom he met and tried to get intimate with earlier in the movie, but she was awkward and unready – drives up to him, looking sexier than when they first met, and she offers him a ride back to her place. He accepts and hops into the car.

The film closes with Bobby, Dina, Paul, and Sally walking along the beach together. 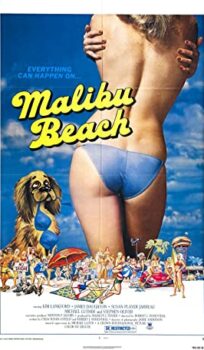