The film Mama was based on this short film

Pooper:
Mama allows Victoria to remain with Annabel and Lucas, but leaps off the cliff with a more-than-willing Lilly. As the pair fall, Mama and Lilly are enveloped in a cocoon and when it hits the water, a bunch of butterflies explode from within. As Victoria embraces her new parents, a butterfly lands on her arm, and she sees it carries the spirit of Lilly within.

Long Ending:
The father of three-year old Victoria (Megan Charpentier) and one-year old Lilly (Isabelle Nélisse) has a nervous breakdown as part of the financial collapse. He kills his partners and the children’s mother before fleeing with his two girls. The car crashes and the family find a cabin deep in the woods. The father decides he must kill them all, but before he can shoot Victoria, a spectral presence envelops him and sucks up his life force (which is how the ghost kills all others in the movie). The ghost stares at the two girls, and then brings them food. Several years go by, and we are shown (via children’s drawings) that the children are raised in the cabin and become feral, though stay healthy and happy.

We then open several years later on Lucas (Nikolaj Coster-Waldau), who is a poor artist. He uses most of his meager salary to pay a few amateur trackers to try and find his nieces. He is supported by his girlfriend Annabel (Jessica Chastain), who loves him despite having a wild lifestyle. One day, the trackers manage to find the cabin and recover the girls. They girls are initially put in the care of a child therapist named Dr. Dreyfuss (Daniel Kash). He informs Lucas and Annabel that the girls believe they were raised by an entity called “Mama,” though he believes Mama is simply a split-personality of Victoria’s. Because she was older when they arrived at the cabin and remembers her parents, Victoria is more able to re-adjust to civilized life than Lilly, who remains obsessed with Mama. The girls’ wealthy Aunt Jean (their mother’s sister) sues for custody, but after Annabel and Lucas agree to let Dr. Dreyfuss have unfettered access to them (he realizes treating them could lead to great fame and fortune), he helps them gain custody and moves the new family into a house his organization owns.

Annabel is supportive, but very distant with the girls. Lucas is thrilled to have them. During an interview, Victoria tells Dr. Dreyfuss about Mama’s vague back-story, and he is intrigued. Dr. Dreyfuss does further research, ultimately discovering that Victoria’s story matches the story of a woman who was in an insane asylum in the 1800s. That woman had a child while institutionalized, but killed several of the nuns before escaping with her baby (who they were going to put up to adoption). Mama fled into the woods, closely pursued by the police. Rather than be captured, Mama  leaps off a cliff with her child. As they plummet, however, the child is caught on an overhanging limb (and killed) while Mama falls into the river and floats downstream. The police recover the baby’s body, place the remains in a box, and store the box in an archive. Dr. Dreyfuss recovers the box, but does not inform Lucas or Annabel of the story.

Meanwhile, spooky things occur in the house. One night, Lucas sees Mama’s butterflies and is startled when he sees her emerging from a wall. Lucas falls down the stairs and goes into a coma, leaving Annabel as the sole provider. At first, the relationship remains frosty, but the girls and Annabel begin to bond to the point where they say they love each other. During a session, Dr. Dreyfuss angers Victoria so much that Mama emerges to defend her. Victoria also reveals that mama had wandered the woods for years looking for her baby, and eventually found she and her sister. Knowing the story is real, Dr. Dreyfuss goes to the cabin to further explore, but is killed by Mama. Annabel, concerned at bruises that appear on the girls and their fear of Mama, steals his notes and the box with Mama’s child’s remains. Annabel soon comes to believe in Mama’s existence too. A now jealous Mama attacks Annabel and knocks her out, possesses Aunt Jean, and abducts the girls. When Annabel regains consciousness, she takes the baby’s remains and drives to the cabin. There, she finds Lucas, who was told by his brother in a dream to rescue the girls at the cabin. They also find Aunt Jean, dead in the cabin.

Annabel and Lucas see the girls standing on a cliff and run up to them. Mama emerges and begin to entice the girls to walk off the cliff. Lucas grabs them both and Mama attacks. Annabel, however, pulls out the baby’s remains and gives them to Mama. The ghost seems placated and begins to ascend to heaven, when she hears Lilly call out to her. Mama tosses her dead child aside and resumes her assault, knocking Lucas out. Mama attempts to knock out Annabel too, but Annabel refuses to give up. Mama ultimately realizes that Victoria wishes to stay with Annabel and relinquishes her, knowing Annabel loves Victoria too. Though Victoria and Annabel beg Lilly to stay with them, she clings happily to Mama (truly, the only mother Lilly ever had). Mama and Lilly plummet off the cliff,  and are enveloped in a cocoon as they fall. When the cocoon hits the water, it shatters and dozens of butterflies emerge. As Annabel and the revived Lucas hug Victoria, a butterfly lands on Victoria’s arm. She recognizes that her sister’s soul is within the butterfly, and that Lilly and Mama are now forever connected. 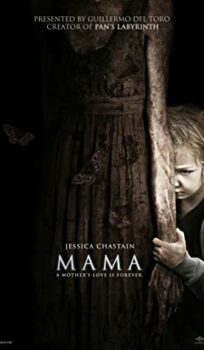