Pooper:
The Lions, Lady Silk, Poison Dagger, Madam Blossom and Brass Body are all killed in battle and the heroes recover the gold and return it to the emperor’s forces. The Blacksmith swears off making weapons and agrees to serve as Jungle Village’s defender. When Zen Yi returns home, he discovers his fiancee has been kidnapped and asks for the Blacksmith’s help in rescuing her.

Long Ending:
Jungle Village is ruled by the Lion clan, who is embroiled in a civil war with the Hyena clan. The Blacksmith (RZA) supplies weapons to both sides, hoping to use the money to buy the freedom of his lover Lady Silk (Jamie Chung) from the brothel owned by Madam Blossom (Lucy Liu). The emperor is transporting a bunch of gold through Jungle Village and the leader, Gold Lion, promises to protect it. Gold Lion is betrayed and killed by his generals – Silver Lion (Byron Mann) and Bronze Lion (Cung Le) – who then unite the warring factions and intend to steal the gold.

A mysterious westerner named Jack Knife (Russell Crowe) arrives at the village and takes up residence at Madam Blossom’s brothel. Meanwhile, Gold Lion’s son Zen Yi, the X-Blade (Rick Yune) leaves his pregnant fiance’s side to avenge his father’s death.  Although Zen-Yi  is initially successful in facing the Lions’ forces, they hire a mercenary named Brass Body (Dave Bautista)  to face him. Brass Body is able to defensively morph his body into bronze, making him impervious to injury from almost any weapon. Accordingly, Brass Body almost kills Zen Yi in combat. The Blacksmith, realizing that his weapons were contributed to Zen Yi’s beating, provides him shelter while Lady Silk nurses him back to health.

The Lions work with another man named Poison Dagger (Daniel Wu) to successfully steal the gold. They also learn that the Blacksmith has hidden Zen Yi and they amputate his hands after he refuses to give up Zen Yi’s location. The Blacksmith is revived by Jack Knife, who is an undercover liaison working for the Emperor. The Blacksmith tells Jack Knife that he was once an American slave who escaped to China after killing his former master (his mother is played by Pam Grier in a cameo role). Once tin China, he was trained by monks who taught him the martial arts and how to master his qi (a spiritual force). The Blacksmith agrees to help Jack Knife in his fight against the Lions and he builds himself a set of Iron fists to replace his now-lost hands.

Madam Blossom agrees to store the Lions’ gold in her heavily booby-trapped vault. In reality, she intends to kill the entire Lion and Hyena clan and use the gold to put herself in power. That night, her girls use hidden poison darts to kill the  the Lions’ men who sleep with them. After Lady Silk is unsuccessful at poisoning Bronze Body due to his defense mechanism, he beats her and alerts the others. A huge fight breaks out between the prostitutes and Lion clan, during which the now-recovered Zen Yi, Jack Knife and the Blacksmith infiltrate the brothel. They arrive too late to save Lady Silk, who dies from her injuries in the Blacksmith’s arms.

During the fight Lady Blossom and Bronze Lion kill each with a bladed fan. Jack Knife watches as Poison Dagger, a former associate of his when he was a mercenary, is crushed by heavy machinery during their fight. Zen Yi pins Silver Lion to the wall and fatally buries him in the emperor’s gold. The Blacksmith uses his training to identify Bronze Body’s weak qi points and uses his powerful fists to literally shatter his opponent. Jack Knife leaves with the emperor’s gold and Zen Yi departs to his home to reunite with his fiancee. The Blacksmith vows to never make weapons again and serve as the defender of the now-liberated Jungle Village.

Post-credit scene – When Zen Yi returns home, he discovers that his fiancee has been kidnapped by a clan of falcon warriors and is imprisoned in a birdcage in the mountains. Zen Yi returns to Jungle Village and asks for the Blacksmith’s assistance in freeing his kidnapped love and their unborn child. 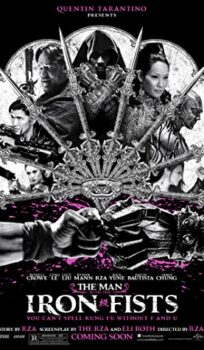