Lee (Casey Affleck) is a handyman who has to return home to the fishing village he used to live in when his brother dies, leaving Lee’s 16-year-old nephew, Patrick (Lucas Hedges), alone.  Lee learns that he was appointed guardian of his son, whose mother (Gretchen Mol) has no custody of him after being deemed mentally unfit and a drunk.

Lee and Patrick coexist but Lee insists they move to Boston where he relocated five years earlier.  We eventually learn that Lee left his house with a fire roaring in the fireplace, causing it to burn down, taking the life of his three children and leading to a divorce from his wife (Michelle Williams).  The painful memories keep him from ever being able to settle back into the area.

Near the end of the film, it’s decided that Patrick will be adopted by a family friend so he can stay in town for the duration of high school.  Although Lee would love to stay with his nephew, he arranges to return to Boston because he’ll never feel comfortable in the place where his life fell apart. 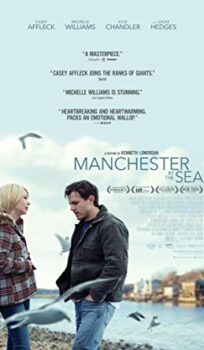