Carol (Diane Keaton) is suspicious of how her neighbor, Mrs. House, died and thinks her husband Paul House murdered her. Diane and her husband Larry (Woody Allen) start to snoop around and discover that Mrs. House’ death was initially faked.  Mr. and Mrs. House made it appear that Mrs. House’s sister, who died naturally in their home, was the actual deceased so they could drain her bank account.  However, Paul double-crosses his wife in an effort to keep all the money and really does kill her and dumps her body at a steel mill, erasing all traces of the evidence.

Diane and Larry, in trying to get a confession out of Mr. House, threaten to blackmail him but he kidnaps Diane and threatens to kill her too.  Larry comes to Diane’s rescue just as House’s  assistant and mistress Mrs. Dalton shoots and kills Paul for double crossing her as well. 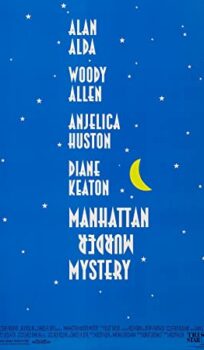