When Jonathan finds out, he and Hollywood (Meshach Taylor) go straight to B.J. Wert’s (Steve Vinovich) office at Illustra to get Emmy back. Roxie (Carole Davis), upset that Jonathan cares more about the mannequin than her, runs off and puts all the stolen mannequins onto a chopping machine to be destroyed.

While Hollywood holds off the store guards, Jonathan manages to save Emmy just in time. Emmy comes to life when he does; and then she is surprised and happy to see that she is still alive even in front of other people.

Then when B.J. is about to have Jonathan arrested, Mrs. Timkin (Estelle Getty) arrives and demands that Mr. Richards and Felix be arrested for trespassing and theft — she has video surveillance evidence. B.J. is also in trouble. Felix recognizes Emmy as the mannequin, but no one believes him. He and Mr. Richards are arrested.

At the end, Jonathan and Emmy get married in the Prince & Co. store window with Hollywood and Mrs. Timkin in attendance. 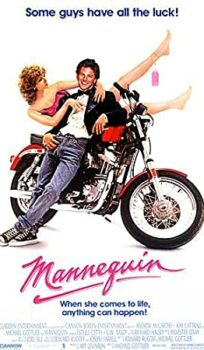