Dennis (Bobby Coleman) is not a martian – he had been using the whole martian persona as a coping mechanism, due to being abandoned at the town’s planetarium by his parents when he was very young, and as an emotional wall for fear of becoming attached to anybody and end up being abandoned again.

When he goes to the ledge of the planetarium’s observatory one night to be “taken back to Mars,” David (John Cusack) stops him, and declares to him that he loves him, that he’ll never leave him, and that his parents were stupid for abandoning such an extraordinary kid. Knowing now beyond a shadow of a doubt that David does indeed love him, Dennis rushes up to him and hugs him, finally casting off his martian persona and returning the love he has for David right back.

Meanwhile, on a plane, David’s book publisher Tina (Anjelica Huston) finishes reading the first draft of David’s Martian Child novel, which he wrote based on his experiences with Dennis, and she cries, implying that she will publish that novel and not the novel David had originally agreed to write. 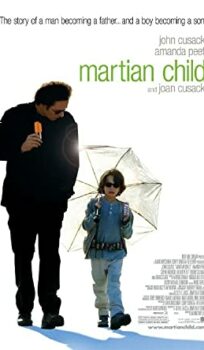