Thomas (Dylan O’Brien) and his friends attempt to rescue Minho (Ki Hong Lee) and a large number of immune children as they finally face off against WCKD. The scientists at WCKD, including Teresa (Kaya Scodelario), want to use Thomas’s blood for a cure. Newt (Thomas Brodie-Sangster) gets infected and is later killed as he starts to become a Crank.

Thomas and the others free the children and get away from the city as an army of infected people start to lay waste to the city and all of WCKD’s people. Thomas fights Janson (Aidan Gillen) and leaves him to get killed by Cranks before trying to escape with Teresa. Thomas is saved, but Teresa falls to her death when the WCKD building collapses.

The survivors go to a safe haven to live out the rest of their days. Thomas finds a note from Newt thanking him for being his friend and asking him to look after the others and himself. Thomas memorializes his fallen friends. 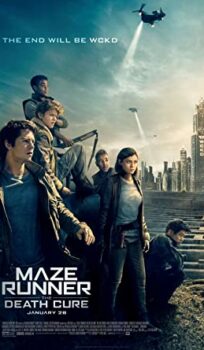