POOPER:
Teddy (Joe Pantoliano) did not murder Leonard’s (Guy Pearce’s) wife (Jorja Fox); he was using Leonard to rip off the drug dealers. It was Leonard himself who accidentally killed his wife. You see, Sammy Jankis (Stephen Tobolowsky) was real, and Leonard *did* investigate his claim, but Sammy wasn’t married. Leonard used the Sammy story to block out the memory that it was *his* wife who had diabetes. She actually survived the rape, and died of insulin overdose later, while trying to test Leonard (who developed his “condition” during that assault). Leonard, with the help of Teddy, had already killed the rapist John G. over a year ago. When Teddy reminds Leonard of all these facts, Leonard, in a fit of pique, records Teddy’s license plate number, flags it as the killer’s, and adds the “Don’t believe his lies” note to the Polaroid, thus setting the wheels in motion for Teddy’s eventual demise.

LONG VERSION:
This is one of Christopher Nolan’s earliest (and still his best) films, an adaptation of his brother’s short story. It is shot following two timelines. The film begins with the final scene and cycles backwards. Simultaneously, the main character tells a story to a man on a phone (this part is shot in black and white) taking place before all the events shown in the color portion of the film. At the end, the black and white portion catches up to the color portion, where we discover what lead to the scene that opened the film.

The film details the main character’s attempts to find and kill the man who raped and murdered his wife. He was injured during the crime and developed a real-life mental condition (anterograde amnesia) where he no longer can create short term memories. At best, he can only remember up to five minutes at a time. By presenting the film backwards, Nolan essentially gives the viewer the same disease as the main character as the viewer also does not know why events are happening until they see the scene beforehand. Masterful work!

We flashback. Leonard’s wife, was raped and murdered and he is out to get revenge. Unfortunately, he was injured during the crime and as a result, cannot make new memories (a real life disease). He can only remember about five-minutes’ worth of events. He can, however , remember all events that occurred prior to the rape and murder of his wife.

To compensate, Leonard has kept a file relating to his wife’s murder investigation. Though pages are missing and portions of the file are redacted, there are a few truths Leonard has gleaned over the years. He has tattooed these truths on his body. He knows the killer’s name is “John G.” The killer was a drug dealer and he has somehow managed to get John G’s license plate. Ostensibly, the man he killed in the opening scene is John G. On his hand is a tattoo reading “remember Sammy Jankis.” He has kept the skin over his heart free of tattoos, intending to ink it only when he has found and killed his wife’s killer.

To remember people and places, Leonard takes Polaroid photos of them and writes notes on the back of the photos. He interacts frequently with a man named Teddy and a woman named Natalie (Carrie-Anne Moss). On Teddy’s photo, Leonard has written “don’t believe his lies.” On Natalie’s photo, he has written “she has lost someone too” and therefore, she will help him in his pursuit. There is also writing scribbled out aon Natalie’s photo. Natalie eventually gives Leonard the info that tells him Teddy’s real name is John Gammell (“John G”) and the DMV records that indicate his car is the car belonging to his wife’s killer. Leonard is also manipulated by Natalie to chase a man named Dodd out of town.

Throughout the film, and prior to the events depicted in the film, Leonard recounts his history to an unidentified caller. He explains that before the murder of his wife, he was an insurance investigator. He investigated a man named Sammy Jankis (Stephen Tobolowsky), who claimed to have the same short term memory loss (caused by a car crash) that Leonard would later suffer after his wife’s murder. Leonard doesn’t believe Sammy’s condition is real and rejects the insurance claim. He also tells Sammy’s wife (a diabetic) that he believes Sammy’s condition is not permanent. To try and break Sammy out of his mental condition, Sammy’s wife keeps telling Sammy it is time for her insulin shot. She thinks that Sammy will realize that he is endangering her life by injecting her with so much insulin and snap out of it. Because Sammy’s memory loss was real, his wife dies via insulin overdose. Leonard says Sammy lacked a system of accountability and that is why he takes meticulous notes and tattoos his body.

Eventually, we learn that Natalie’s boyfriend (the person she lost) was a drug dealer named Jimmy Grantz that Leonard had killed, believing Jimmy to be “John G.”  After Leonard kills Jimmy and steals his clothes and car, he realizes that certain statements Jimmy made prior to being killed indicate he was not the wife’s killer. Teddy shows up and is revealed to be the cop who investigated the murder of Leonard’s wife. Teddy states that he helped Leonard eventually find and kill the real John G. years ago, but that the memory didn’t stick. Teddy even produces a photograph of a bloodied Leonard pointing at his heart (where the final tattoo would have gone after the murder of John G) that commemorates the real killing of John G. Because Leonard didn’t remember his revenge, Teddy has been identifying criminals with the name John G. and manipulating Leonard in to killing them (Teddy then steals their money and splits the money with Leonard). Finally, Teddy reveals that Sammmy Jankis was indeed a con-man who didn’t have a wife. Instead, Teddy says Leonard’s wife survived the assault and rape and it was she who was killed via insulin overdose by Leonard himself.

Leonard storms out, enraged at Teddy’s manipulation. Teddy argues he is simply trying to keep Leonard happy, and notes that Leonard deludes himself by destroying and redacting pages of his reports so that he can justify the killings of the “John G”s that Teddy locates. Since all the John Gs they kill are criminals, Teddy reasons they are doing a good thing. Teddy states they will never run out of John Gs (thus, Leonard’s hunt for his wife’s “killer” will never end) since that is a common name and makes an offhand remark that even he is a “John G” as his name is John Gammill. Leonard decides that he will have his revenge against Teddy. He writes the statement “don’t trust his lies” on Teddy’s photo and writes down Teddy’s license plate as the plate belonging to his wife’s killer. In essence, Leonard has manipulated himself into killing Teddy. Leonard then drives to the bar Natalie works at  after finding the address in Grantz’s pocket and once

Natalie plays into the story as she is Jimmy Grantz’s girlfriend and partner in crime. Because she meets Leonard after he  killed Jimmy and stolen Jimmy’s clothes and car, she deduces that Leonard killed Jimmy. Dodd is Grantz’s supplier who she owes money to and she manipulates Leonard into getting him off her back after Jimmy’s death.The scratched-out part of her photo stated “do not believe her.”

One last twist, it is intimated that Leonard’s wife was alive during Leonard’s attempt to find and kill the actual John G. and that Leonard willfully suppressed this memory. Of course, it is up to the viewer to believe Teddy’s recitation of Leonard’s history. 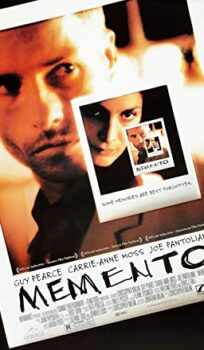