Chris (Paul Gross) reconciles with his father Gordon (Leslie Nielsen) and also makes amends with Julie (Michelle Nolden) for standing her up at the altar years before. Also, a budding romance happens between him and Julie’s sister Amy (Molly Parker).

Chris and the others in the Long Bay club makes it to the finals against Yount (Greg Bryk) and his team, but find themselves trailing 6-0. After Gordon tells Joanne (Polly Shannon) that the team needs Neil (James Allodi) in order to get back into this game, Joanne goes to the local country club where an unhappy Neil and his overbearing wife Linda (Kari Matchett) are getting inducted as members. When Joanne shows up and tells Neil that the team needs him, he finally stands up to Linda, and then heads to the rink. His presence betters Long Bay’s performance, but they are still down by one point going into the last end.

In the midst of Long Bay’s final shot, Neil’s foot touches the rock, but Yount allows Chris to reset the rocks and try again. This time around, Chris decides to chuck the rock made of Julie’s father Donald’s (James B. Douglas) ashes hard, and it smashes into one of Yount’s stones and goes to pieces. The pieces land in the center of the target (like Jason wanted in his will) and around it, and the way they are situated gives Long Bay the victory and the Golden Broom trophy.

Yount commends Chris for his shot, and Eddy (Jed Rees) learns from his wife Lilly (Jane Spidell) that she is pregnant. James’ (Peter Outerbridge) nemesis Stuckmore (George Buza) then shows up, and he tells James that he himself came from a long line of curlers, and because he felt Long Bay’s victory restored some integrity to the sport that he felt was sullied by Yount and his flashy ways, he is forgiving James’ debt to him.

At the celebration party at the local bar, Neil and Joanne begin to hit it off, Gordon asks Julie and Amy’s mother Eva (Barbara Gordon) for a dance, and outside Chris and Amy kiss and then celebrate with some of the townsfolk in the street. 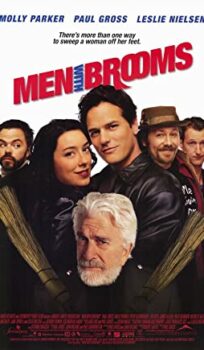