Pooper:
Despite his conscience weighing heavily on him, Hendrik supports the Nazi regime in exchange for fame and fortune.

Long Ending:
This film is loosely based on the life of German actor Gustaf Gründgens

The film opens in Hamburg Germany during the 1930s. Hendrik (Klaus Maria Brandauer) is the lead actor/director of the most respected theater in the city. He is dating a black German woman named Juliette (Karin Boyd) and is enjoying his success. Hendrik dreams of bringing his plays to the masses and supports liberal politics. He opposes the Nazi party as it begins its rise to power. Hendrik essentially has one of the actors, a man named Hans (György Cserhalmi), fired for his affiliation with the Nazi party.

Hendrik meets a set designer named Barbara (Krystyna Janda) and the two fall in love. Barbara is a liberal intellectual from a wealthy family. Hendrik breaks up with Juliette, although she’s confident he won’t leave her for long. Barbara and Henrik are married after a brief courtship. Soon after, Hendrik leaves Hamburg for a job to perform at the State Theater in Berlin.

Hendrik finds great success. He is particularly feted for his role as the demon Mephisto in the play Faust (a play about a man who is damned to hell after exchanging his soul to Mephisto and Satan in exchange for youth, fame and fortune). Hendrik gets more lead roles and even begins acting in films. He also pays for Juliette to move to Berlin where they resume their sexual relations in secret. Not all is rosy. His old friend Otto (Péter Andorai ) asks Hendrik to help his fellow actors protest the Nazis. Hendrik declines.

The Nazis and Hitler are elected to lead the government. Otto and many other actors are arrested while many others flee the country. Barbara moves with her family to France while Hendrik goes to Budapest to shoot a movie there. The plan is for Hendrik to join his wife in France once the film is over. However, one of Germany’s top actresses reaches out to Hendrik and asks him to return to Germany and work with her (also assuring him that she made sure he is no longer considered a political dissident). Despite his family living abroad and his director and another mistress begging him not to go back to Germany, Hendrik returns to continue his work as an actor.

As Hendrik’s fame grows, he becomes a supporter of the Nazi regime. He appears at publicity functions and assists them in presenting plays that celebrate German nationality. He even reprises his role as Mephisto on the stage, in which he now works alongside Hans. Despite appearing to fully support of the Nazis, Hendrik takes some steps to help those in need. He keeps Juliette hidden in his secret apartment, allows one of his anti-Nazi friends from Hamburg to live with him, and uses his political connections to free Otto from prison. Juliette is angry that despite being a native German, she must go into hiding because the Nazis want to kill her for her skin color. However, he does nothing to help Hans once Hans defects from the Nazi party. Hans is subsequently murdered by the Nazis.

Hendrik is offered the job as director of the national theater. As part of the deal, the Nazis demand he end his relationship with Juliette and divorce Barbara. Although the Nazis want to imprison Juliette, Hendrick convinces them to exile her to France instead. He then takes the deal.

Despite reaching great fame and fortune as a Nazi supporter, he learns that his power is limited. The Nazis arrest and murder Otto despite Hendrik’s intervention. Although Hendrik’s conscience grows heavy, he continues to support the Nazi regime. Hendrik also begins a relationship with Barbara’s best friend who also lives in Germany.

He produces a German-ized version of Hamlet with himself in the lead role. The play is a rousing success. A Nazi general drives Hendrik to the site of a new theater and demands that Hendrik go onto the stage. In a dream-like sequence, powerful spotlights are turned on that blind Hendrik. No matter where he runs, the spotlights follow. The film ends with Hendrik trying to cover his eyes and flee the spotlight and asking what more the Nazis want from him. 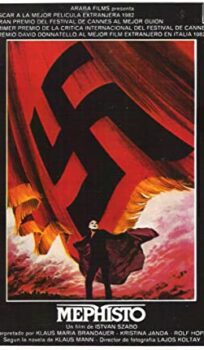