The NSA has created a code so complex that its creators believe neither a human or computer can decipher it. Their assumptions are soon realized to be false when they receive a message from an autistic boy named Simon (Miko Hughes), who announces over a telephone line that he has completely decrypted the code.

The villain Colonel Kudrow (Alec Baldwin), seeks to silence Simon, a boy who has discovered the solution to an elaborate government encryption. He sends a hit man to murder Simon and his family. After killing the boy’s parents, the assassin searches the house, fails to find Simon, and leaves at the sound of approaching sirens.

Bruce Willis plays Art Jeffries, an undercover FBI agent who is assigned to protect Simon. He finds Simon hiding in a cache of his bedroom closet, and takes the boy under his wing. Jeffries begins to realize the difficulty of protecting, let alone questioning Simon, because of his impaired social abilities as a result of his autism. The situation is further complicated by the fact that nobody at the FBI believes Simon is in any danger.

Meanwhile, Colonel Kudrow, upset by disagreement over how to handle the case, murders one of his employees. The murdered employee’s friend turns to Jeffries for help, and together they set a trap in which Kudrow is killed.

The film ends with Simon being adopted by a new family. 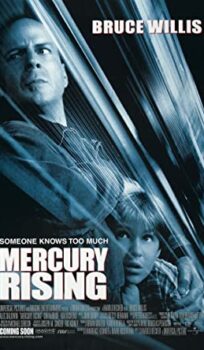