Message in a Bottle

When Garrett (Kevin Costner) realizes he loves Theresa (Robin Wright Penn) and doesn’t want to lose her, he decides that it’s time to let go of his dead wife and pursue a new life with Theresa. He writes his last “Message in a Bottle” to his dead wife, telling her this, and sails out to sea on his boat to throw the message in the water. Before he throws the bottle out, a storm comes up and he discovers a family in a boat about to capsize. He rescues the child and father, and dies trying to rescue the wife. Garrett’s father gives Theresa the last message in the bottle after Garrett’s death. 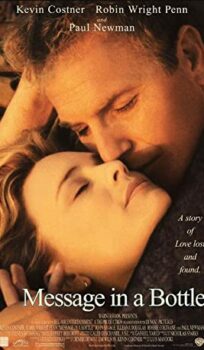