Eve Peabody (Claudette Colbert) arrives in Paris on the train from Monte Carlo.  She is an american girl trying to make it in Europe, but is down on her luck.  She has no money, her luggage is being held because she can not pay her bill, and all she has is the fancy evening gown she is wearing.  She offers cab driver Tibor Czerny (Don Ameche) a deal  If he drives her from club to club to try and get a job singing, she will pay double what the meter shows at the end.  She has no luck.  Tibor is clearly falling in love with her, but she wants to get away from him.  She sneaks into a line of people in formal attire, entering a fancy party in a mansion.  When the hostess discovers that there is an uninvited person named Eve Peabody, she can not use her real name, and calls herself Baroness Czerny.  At the party, she joins a card game, where Jacque also falls for her.  Mr Flammarion is a romantic rival of Jacque.  Flammarion knows she is a fake, but prefers to have Jacque chasing the “Baroness”  rather than chasing Flammarion’s lady.  Flammarion is very rich and pays for a suite at the Ritz, and fancy clothes, for the “Baroness” to keep up the act.

Tibor Czerny learns where Eve is, and that she is using his name.  He shows up, pretending to be her husband, Baron Czerny, there to take her home.  She does not want to go with him.  They play a cat and mouse game of trying to force the other to do what they want, without revealing their fake identities.  Eventually, Jacque wants to marry Eve, but everyone thinks Eve is married to the “Baron”.  They have to go to court for the “Baron” and “Baroness” to get divorced.  During the court proceedings, Eve realizes she loves Tibor.  To the judge’s great surprise, they end up wanting not a divorce, but to get married. 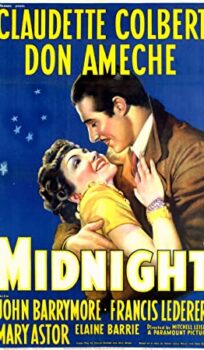