While V (Melanie Griffith) is showing Frank (Michael Patrick Carter) and his two friends Kevin (Brian Christopher) and Brad (Adam LaVorgna) a good time at their school dance, in comes her pimp Waltzer (Malcolm McDowell) -who was hot on her trail-, confronts her over the missing money and tries to hoist her away at gunpoint; but, before he can do further, the three boys rescue her and they all try to driveway, leading to a car chase. Eventually, the quartet wears the car out and it explodes, which enrages and anguishes Waltzer, thinking the money was lost in the explosion. Furious, he escapes unnoticed, taking V’s friend and fellow hooker Betty (Anne Heche) with him.

V parts ways with the three boys, who all seem to have been somewhat changed from their interaction with her. She goes to mob boss “Jerry The Pope” (Philip Bosco), to denounce Waltzer’s embezzlement and assure him she doesn’t know where the money went, in exchange to being allowed to walk away from the life; the mobster forgives her, gives her her freedom and promises that “after today, Waltzer wouldn’t exist anymore”. Later, she finds a backpack that seemingly belonged to one of the boys and finds the stolen money inside.

In the end, Frank’s dad, Tom (Ed Harris), who was about to be taken to jail for interfering with the operation that would turn the wetlands into residential development, is surprised when V reappears announcing she bought the grounds -obviously with the money-, to preserve it and “give a permanent home to the glossy ibises that inhabited it”. They rekindle their budding romance. As she walks away, he wonders how to find her, to which she announces that she now also owns the ice cream shop where they went earlier on a date. At the same time, Frank, upon checking his heartbeat by V’s recommendation, discovers “he has a hair” and yells it proudly -an indicator that he was growing up and hitting puberty. 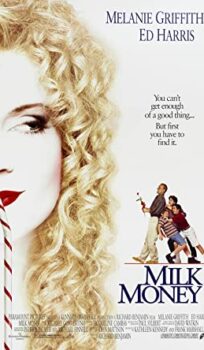