POOPER
Because they were nervous, Dinesh and Rinku’s tryout is a flop, but J.B. is able to get another tryout for them.  More relaxed this time, the pair do much better, and both are signed by the Pittsburgh Pirates.  J.B. will continue to do the Million Dollar Arm contest every year, and he and Brenda eventually get married.

LONG VERSION
Based on a true story and set in 2008, Los Angeles-based sports agent J.B. Bernstein (Jon Hamm) is seeking new athletes to represent, but he and his partner Ash (Aasif Mandvi) are having trouble finding any.  As a result, their agency is struggling to survive.  One night, J.B. is at home watching TV, and he is switching back and forth between reality shows and a cricket match.  This gives J.B. an idea:  he’ll go to India to find untapped baseball talent in the form of a game show called The Million Dollar Arm.  He approaches Mr. Chang (Tzi Ma), an investor friend of his, and pitches the plan to him that he can find an Indian cricket player and turn him into a Major League pitcher in two years.  Chang agrees to fund the project on the condition that it be done in one year.  J.B. then approaches one of his former clients, Tom House (Bill Paxton), who is now the pitching coach of the USC baseball team.  Even though Tom believes that his plan is impossible to pull off, he will agree to coach any players J.B. finds.  Despite his Indian heritage, Ash will stay in Los Angeles to run the agency, and J.B. will make the approximately two month trip to India.  Before he leaves, J.B. hires retired scout Ray Poitevint (Alan Arkin) to join him and help with his search.

Now in India, J.B. hires a local named Amit (Pitobash Tripathy) to be his interpreter, and he, J.B. and Ray begin their search.  Tryouts throughout India produce 20 players with enough potential to enter the contest, with the finals being broadcast throughout the country.  The contest consists of the 20 players throwing baseballs, with points being awarded for their speed and accuracy.  The top two will win a cash prize and will go to America with the chance to become a Major League pitcher.  The two winners are Dinesh Patel (Madhur Mittal), who’s father initially refused to let him tryout, and Rinku Singh (Suraj Sharma), who has an unusual delivery style and is the only lefty among the 20.

J.B. brings Dinesh and Rinku, as well as Amit, to Los Angeles to begin their training.  After getting kicked out of their hotel for accidentally setting off the fire alarm, the three move into J.B.’s huge home, which is next door to his med school neighbor Brenda (Lake Bell).  Everyday for the next several weeks, J.B. drops off the trio with Tom while he returns to his office to find more clients.  Dinesh and Rinku don’t understand why J.B. doesn’t take more of an interest in their training.  Combine that with their complete lack of knowledge about the game of baseball, and they think he has already given up on them.  Brenda is the only one who seems genuinely concerned with their well-being.

Sensing their frustration, J.B. decides to take Dinesh, Rinku, and Amit to a party held by an NFL player named Popo that he wants to sign.  They promptly get sick, and J.B. is forced to cut off negotiations with Popo to drive them home.  When he returns to the party to continue the negotiations, J.B. learns that Popo has already signed with another agency.  An angry J.B. returns home and wants to blame the trio for possibly costing him his agency.  However, Brenda is able to calm him down and tells him that if he were to start treating Dinesh and Rinku like people instead of a business deal, they could turn into the players that will save the agency.  Brenda then kisses J.B., and soon after they start a relationship.

Knowing that Brenda is correct, J.B. begins to take more of an interest in Dinesh and Rinku’s development, and also begins to encourage Amit to take on more of a role as a coach, something he had expressed interest in back in India.  As time goes on, both Dinesh and Rinku show remarkable improvement in their pitching, as well as their understanding of life in America.  But as Mr. Chang’s one year limit is approaching, neither are ready for professional baseball.  J.B. asks him for an extension, but is refused, and the tryout must be held in two weeks.  J.B. cannot find a field to use on that short notice, so the tryout will be held in a mall parking lot.  Since their story is making national news, ESPN and Sports Illustrated will be covering the tryout, and several Major League scouts will be in attendance.  The Indian media is also covering the tryout, and an Indian reporter tells both Dinesh and Rinku that the tryout is being broadcast live in India.

That news unnerves both players, and it shows once the tryout begins.  Neither can throw with any accuracy, and both are throwing at speeds well below Major League standards.  As a result, the tryout is a flop and all of the scouts pass on signing them.  J.B. knows that they were nervous and would do better next time, but Mr. Chang tells him that he is no longer funding the project.  While J.B. is scrambling to set up another tryout, he meets with Ray, who introduces him to the lead scout of the Pittsburgh Pirates.  That scout was unable to attend the tryout, and doesn’t know that they flopped.  J.B. is able to set up another tryout at USC, but this time without media coverage.  As a result, a more relaxed Dinesh and Rinku have an excellent tryout for the Pirates scout.  The next scene shows a video of the real Tom House telling the real Dinesh and Rinku that the Pirates want to sign both of them.

The final scenes shows video of the real Dinesh and Rinku playing professional baseball, though neither has made it to the Major Leagues.  Their success has lead to the increased popularity of baseball in India, so J.B. has made The Million Dollar Arm an annual contest.  He and Brenda eventually married and have a child.  Finally, Amit returned home and became the head coach of an Indian baseball team that has yet to lose a game. 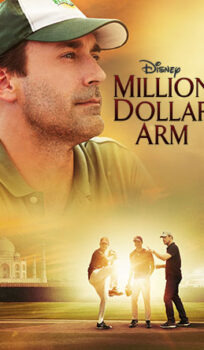