Not long after Milo the orange cat and Otis the pug finally reunite, a white female cat named Joyce soon comes into the picture, and Milo is smitten with her and starts to unintentionally hardly pay any attention to Otis. Otis soon feels left out and splits from them on the journey back to the farm, going his own way. Winter soon comes, interrupting the journey for all. Milo & Joyce take refuge in a tree trunk and later an abandoned shack until spring while Otis forged on, but while doing so he meets another pug named Sandra and is smitten himself, understanding what had come over Milo. The two spend the winter in a small cave.

During their hibernation, Milo & Joyce have kittens and Otis & Sandra have puppies. While Otis is out getting food for his puppies, he happens upon the abandoned shack Milo has set himself and his new family up in, and Milo gives him some fish to take back with him. Milo tells Otis that he really missed him, and so they made an agreement: They would all meet in the spring with their families, and together journey back to the farm.

When springtime comes, Milo & Otis and their families meet up and get to know each other, and they all finally make it back home. 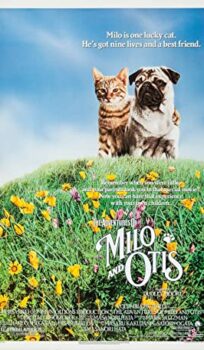