The Queen (Julia Roberts) casts a spell to make Prince Alcott (Armie Hammer) fall in love with her and she announces that they will be married. Snow (Lily Collins) and the dwarves kidnap the prince and Snow’s kiss breaks the spell.

Furious, the Queen sends the beast in the forest after Snow to kill her. After a fight in the woods, Snow notices a magical necklace around the beast’s neck and when she destroys it, the beast transforms into her father the King (Sean Bean). With the spell on the King broken, the Queen loses her power and she is turned into an old woman.

Snow and Alcott are married. At their wedding the Queen comes disguised and and tries to trick Snow into eating a poisoned apple but Snow sees through her and hands the apple back.

The movie ends with a big Bollywood-style dance and song number, because, why not? 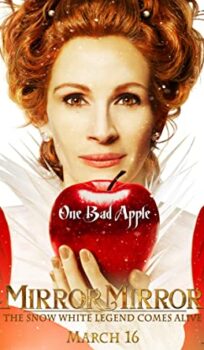