After many harrowing incidents (including the re-breaking of his feet when he makes an escape attempt), Sheldon (James Caan) finishes his forced “Misery” novel, and while Annie (Kathy Bates) is enthralled by reading the conclusion, he assaults her with the typewriter. They fight, and he eventually kills her. A year later, he is seen walking (barely) again, and his semi-autobiographical novel is a hit. 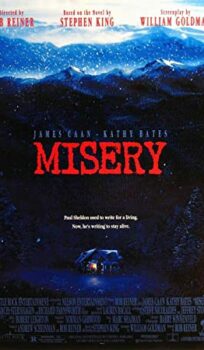