The story of the Japanese writer Yukio Mishima is interspersed with synopses of three of his novels.

At the end of the film, Mishima captures a Commanding Officer of an Army Base and holds him hostage. After delivering a speech to the troops telling them to stage a coup d’etat and embrace the old ways, Mishima commits ritual suicide.

The three novels are concluded as follows. Temple of the Golden Pavillion shows the temple torched in an act of arson, Kyoko’s House shows two lovers after a murder/suicide and Runaway Horses shows a fanatical revolutionary committing suicide after executing a political target.

The viewer is left with the impression that through his books Mishima had told the public long ago that he would kill himself. 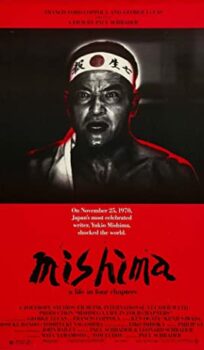