Elizabeth Sloane (Jessica Chastain) is an aggressive lobbyist who leaves the firm she works at when they demand she fights an amendment which would make background checks mandatory for gun owners.  Instead, she begins using her skill set to fight for the amendment.  As she begins to make momentum, her previous firm finds some evidence proving she bribed the Kenyan government to get a bill dropped and uses it to indict her, to taint her reputation, simultaneously taking down the amendment.

It is revealed that Elizabeth planted the evidence in her old firm with a friend who stayed behind so she could videotape her former boss blackmailing a congressman to launch the hearing, proving how corrupt he is.  This taints his reputation and the amendment is passed while Elizabeth serves a light prison sentence for violating a gift ban. 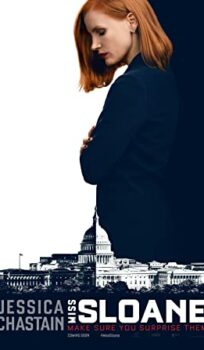