POOPER:
Gerry and Curtis don’t get into the poker game, but they do end up winning $500,000 playing craps. The next day, Gerry takes his half of the winnings, buys back the car he had to sell earlier, and he and Curtis go their separate ways.

LONG VERSION:
Gerry (Ben Mendelsohn) and Curtis (Ryan Reynolds) are a pair of gamblers who strike up a friendship while playing poker at a casino in Iowa. Curtis tells Gerry that he is successful playing cards because he doesn’t care about winning. The next day, the duo go to a dog track, where they win quite a bit of money, but Gerry is unable to quit while they are ahead and ends up gambling it all away. They later decide to travel down the Mississippi River and gamble in various cities in order to win the money needed to enter a high-stakes poker game in New Orleans hosted by Curtis’ friend Tony Roundtree (James Toback), which has a $25,000 buy-in. In reality, Gerry needs to get out of town because he owes a lot of money to a lot of people who have threatened to hurt him, and he doesn’t have the money to pay them back.

Curtis spots Gerry $2000 and they head out. The first stop is in St. Louis, where they win big on a riverboat casino. They use some of their winnings on a pair of prostitutes, Simone (Sienna Miller) and Vanessa (Analeigh Tipton). Simone, who has been with Curtis before, warns him about previous times he has trusted another gambler and got burned. Now in Memphis, Gerry is winning big at a poker table, but loses everything when a river card gives the pot to his opponent. He lies and tells Curtis he won $7,000 and wants to go to Little Rock to make amends with his ex-wife Dorothy (Robin Weigert). Curtis tags along and waits in the car while Gerry and Dorothy talk. While Curtis is talking to Simone on his phone, Dorothy catches Gerry trying to steal money from her and kicks him out of the house.

The duo head to Tunica, Mississippi to gamble at Curtis’ favorite casino, but his membership card is expired. Curtis asks Gerry to pay for the room, but it’s then he learns that Gerry lied about winning in Memphis, but promises he’ll get it back. Curtis warns him that if he keeps lying about his gambling, it won’t end well for him. They continue on to New Orleans, where they decide to go to a horse track. With no money to gamble with, Gerry sells his car. They decide to bet it all on a longshot, but Curtis decides to bet on another horse named Mississippi Grind instead, and that horse ends up winning. Curtis doesn’t tell Gerry this, and he thinks they are broke. Gerry goes to Tony’s house, where he is hosting the poker game, and tries to talk his way in, but fails. Curtis goes to a local cabaret, where his mother Cherry (Marshall Chapman) is performing, and gives her the winnings.

Gerry goes to the local casino, and he spends his last few dollars playing roulette, and wins. Curtis also goes to the casino, where he catches up with Gerry at the blackjack table. Gerry wins a big hand, and he splits the winnings with Curtis. They then hit the craps table, and several hours later, the pair have combined to win $285,000. Curtis takes a break to take a call from Simone, where he proclaims his love to her, then returns to the table. They decide to bet it all on one last roll of the dice, and they win $500,000. That night, Gerry tells Curtis he wants to use his share of the money to do something nice for his estranged daughter Wendy. They were comped a suite by the casino, and they place the money in the room safe. The next morning, Curtis wakes up to discover Gerry is gone, and he took his half of the money.

The movie ends with Gerry buying back his car and contemplating what to do next. 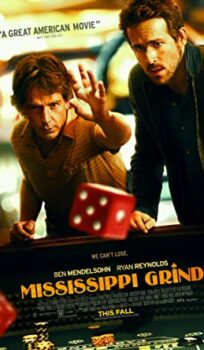