SHORT VERSION
After losing their three best players to free agency, Billy Beane, the GM of the Oakland A’s, begins using a theory called Moneyball to assemble a team.  Moneyball consists of finding players who are good at getting on base and will play for less money.  After a slow start, the team wins a record 20 games in a row and makes the playoffs, but lose.  After the season, Beane is offered a job with the Boston Red Sox, but turns it down.

LONG VERSION
Billy Beane (Brad Pitt) is the General Manager of the Oakland Athletics, who lost in the 2001 MLB playoffs to the New York Yankees.  During the offseason, the Athletics (or A’s) lose their three best players to free agency, and Beane is told by the owner that he will not get any extra money to sign free agents.  During a visit to Cleveland to discuss trades, Beane meets Peter Brand (Jonah Hill), a recent Yale grad with an economics degree and a radical theory about how to assess the value of players that will eventually be called Moneyball.  Beane tests Brand’s theory by asking him in which round Beane, a former phenom who washed out in the majors, would have been drafted.  Beane turned down a scholarship to Stanford to sign with the New York Mets, a decision he later regretted.  Brand tells him that he should have been picked in the ninth round, and Beane would have turned down the offer and gone to college.  Agreeing with him, Beane hires Brand away from Cleveland and names him his assistant GM.

At a meeting with the team’s scouts, Beane and Brand tell them that they are going to start looking for players who can get on base and will play for a low contract, and disregard everything else about the player.  This angers the scouts, and the head of the scouting department quits.  Beane proceeds to sign several players that other teams have passed on, including Chad Bradford, a right-handed relief pitcher with an unusual delivery style; David Justice, an outfielder who has half of his salary paid by another team; and Scott Hatteberg, a catcher who will be playing first base, even though he has never played any position except catcher.  Meanwhile, Art Howe (Philip Seymour Hoffman), the A’s manager, is unhappy with Beane because he has only been re-signed to a one year contract.  Howe interprets this as a lack of faith from Beane and will not go along with his plan.  This is shown by Howe’s insistence in playing Carlos Pena at first base, who is a better defensive player but a worse hitter than Hatteberg.

The A’s start the 2002 season badly, and everyone is blaming Beane for it because he signed lousy players.  Beane demands Howe start Hatteberg instead of Pena and that will cause the team to win, but Howe refuses.  He claims that once he is let go after the season, he wants to show potential interviewers that he did the best he could with what he was given.  Beane solves the problem by trading away Pena to Detroit, forcing Howe to start Hatteberg at first base.  At this time, the players are starting to buy into Moneyball, and the team responds by beginning to win.  The team proceeds to win 19 games in a row (tying a Major League record) and go into first place in their division.  Everyone credits the winning streak to Howe’s managing style, forgetting that these are the same lousy players Beane signed.

One of Beane’s superstitions is to never watch a game, and as the team is going for a record 20th straight win, Beane isn’t at the ballpark.  When he finds out the team is up 11 runs after 3 innings, he returns to the stadium.  Just as he starts watching, the A’s immediately fall apart and their opponents come back to tie the game.  With Beane hiding in the team’s weight room, Hatteberg hits a walk-off home run to win the game and earn the 20th win in a row.  Later on, Beane tells Brand that, despite the streak, he is unhappy because unless the A’s win the World Series, no one will care about this.  At least, he adds, this proves that Moneyball does work.  A few weeks later, the team in back in the playoffs, and promptly loses to the Minnesota Twins.  Following the season, Beane travels to Boston to take a meeting with the owner of the Red Sox.  The owner loves Beane’s new philosophy and will begin using it, and he wants Beane to be his GM.  He is offered a contract that will make him the highest paid GM in baseball history.  The movie ends with Beane turning down the offer because he wants to win in Oakland.  Two years later, the Red Sox won the World Series using the Moneyball method.  Beane is still the GM in Oakland, and the A’s still haven’t won a World Series. 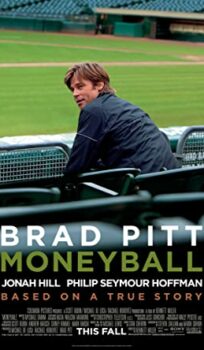