Algerian-born Montreal schoolteacher Bachir Lazhar (Mohamed Fellag) lied when he said he had 19 years of teaching experience in Algiers.  He instead ran a restaurant and it was his wife who was a teacher.  She had written a book criticizing the political situation in Algiers, the response to which put their whole family’s lives in danger.   Lazhar traveled to Canada to prepare for his family’s immigration, but they were killed in an arson attack on their home.  At an immigration hearing, it is decided that Lazhar’s fears for his life were valid and he was successfully granted political asylum.

However, Lazhar loses his teaching job after he gets his class to communicate their feelings about the recent suicide of their previous teacher.  One particular student, Simon, breaks down over his feelings of guilt about the suicide – he had previously pushed the teacher when she tried to hug him and was also the first one to discover the body.  Even though Lazhar successfully assures Simon the suicide was not his fault, Simon’s parents (as well as the parents of a few other students) did not like Lazhar bringing up these painful memories and they discovered Lazhar’s status as a refugee through an investigation.  As a result, both Lazhar and the principal (who previously found out the truth, but covered it up) were fired from the school.  Lazhar asks to be allowed to finish out the day, so the kids would have a chance to say goodbye.  Lazhar finishes out his last day by getting the students to correct a fable he had written and at the end of the day Alice, the student who connected the most with Lazhar, returns to the classroom and hugs him goodbye. 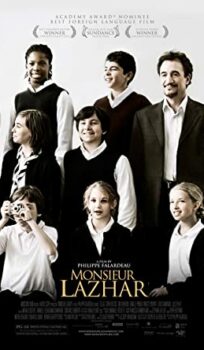