Hugo Drax (Michael Lonsdale) wants to launch satellites filled with a neurotoxin derived from an Amazon Jungle orchid from his space station to wipe out all life on Earth. He will then repopulate Earth with his hand-picked, genetically-perfect human specimens brought to his station on a fleet of his Space Shuttles (called “Moonrakers”).

This plan upsets his henchman Jaws (Richard Kiel) who has fallen in love with a petite, bespectacled woman. Jaws helps James Bond (Roger Moore) and Dr. Holly Goodhead (!) (Lois Chiles) kill Drax and destroy the station as a space shuttle brings up a horde of astronaut-commandos in its payload bay who have a floating laser battle outside the station with Drax’s men.

Bond and Holly hop into Moonraker 5 and shoot down the three globes that Drax managed to launch with the shuttle’s onboard laser cannons (oy!). As, Q (Desmond Llewelyn) attempts to contact the Shuttle, we hear that Jaws and his girlfriend actually survive the re-entry of the station and Bond is, ahem, “attempting re-entry” with Holly as they float in zero-g. 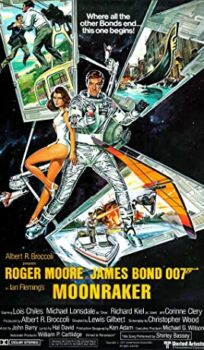