Moses, not Paul, is Laura’s father.

Lionel threatens to release that info to the press unless Moses agrees to leave her alone. He also tells Moses that Lieberman is on the take. Despite telling Paul he will approve his plans for the city, Moses denies them anyway out of spite. Lionel goes to the property Frank left him in the deed, and Laura is there waiting for him.

LONG VERSION:
Set in mid-1950s New York, Lionel Essrog (Edward Norton) works at a detective agency, along with his partners Gilbert, Danny, and Tony (Bobby Cannavale). Their boss, Frank Minna (Bruce Willis), is a private investigator who rescued them as kids from an abusive orphanage. Lionel, who was given the nickname “Motherless Brooklyn” by Frank, has Tourette’s Syndrome, and exhibits the usual symptoms (head jerking, vocal tics, etc.), as well as OCD, but he also has a photographic memory. Frank is working a big secret case, and has asked Lionel and Gilbert to watch his back while he takes a meeting involving the case. Lionel overhears Frank negotiating with a man named Lieberman and two others, who can easily be described as goons, over the cost of an important document. Afterward, Frank is shot by the goons and later dies in the hospital before he can tell Lionel what happened.

Wanting to know who was responsible for killing Frank and why, Lionel begins to wears Frank’s hat and coat, and soon discovers a matchbook that leads him to The King Rooster, a jazz bar in Harlem. This begins his investigation into Frank’s death, and he makes sure to include his partners at the detective agency. He asks Danny to watch the club and take pictures of everyone coming and going. During the investigation, he learns about a woman named Laura Rose (Gugu Mbatha-Raw), who Lionel knows from overhearing Frank is involved in the case. Laura works with Gabby Horowitz (Cherry Jones) and together, they are fighting the gentrification of poor and minority-owned neighborhoods throughout New York. They say that the man solely responsible for the driving out of blacks and other poor people in New York is the city developer, and head of New York’s Borough Authority, Moses Randolph (Alec Baldwin). Lionel attends a public meeting featuring Moses, where he is being harassed over his plans for the city by, among others, Laura, Gabby, and a man named Paul (Willem Dafoe). After stealing a reporter’s credentials, Lionel pretends to interview Paul, who tells him that Moses is the most powerful man in the city, even more than the mayor. While investigating Paul, Lionel learns that he is an engineer who has a renovation plan that will save the neighborhoods. He is also Moses’ brother, and they have not gotten along in many years.

Still pretending to be a reporter, Lionel tracks down Laura and asks her if she would like to be featured in a story about gentrification. She takes him to The King Rooster, and after talking for a while, they have a dance. Her father Billy (Robert Wisdom), who owns the place, sees them together and assumes Lionel works for Moses, so he has him beaten unconscious. The band’s trumpet player (Michael K. Williams) rescues him and takes Lionel to his place. The next day, while he is recovering from the beating, Lionel continues his investigation and learns that local businessman William Lieberman (Josh Pais), the man Frank was meeting with before he was killed and also a member of the Borough Authority, is taking kickbacks on all of Moses’ deals, and that many of the housing relocation programs are scams. Later, Lionel gets a call from Billy, who apologizes for the beating after he learned from the trumpet player who he really is, and tells him that he has information for him. But when he returns to the bar, Billy is dead and the scene is staged to look like a suicide.

Lionel stays with a distraught Laura at her place, and after he spends the night there, it’s obvious the two are developing feelings for each other. Lionel starts asking her questions about what she and Gabby have concerning Moses that would cause the Borough Authority to kill Frank and now Billy. She quickly figures out Lionel isn’t a reporter, and he confirms it, adding that he’s a detective trying to get justice for Frank. He also says her life may be in danger and she needs to be careful. As he is leaving Laura’s apartment, Moses’ goons grab Lionel and take him to a meeting with Moses. There, Moses, after telling Lionel why he’s doing what he’s doing to the city, tells him to stop the investigation. He’ll even give him a job with the Authority, but he only has until the end of the day to accept the offer. Back at the agency, Lionel and Danny are going over the evidence they have acquired concerning this case. While taking another look at photos Danny took at the club, Lionel sees one of Paul and Billy together. Lionel goes to see Laura, who reveals that Paul, not Billy, is her real father. Billy never told her the truth, but she figured it out some time ago and never talks about it. Lionel then confronts Paul. Lionel figures that this information would be a problem for Moses, but he can’t believe that Paul would put his daugher in harm’s way to get back at him. Paul denies he is Laura’s father, and he tells Lionel that Frank and Billy were working together to get more money out of Moses and the Borough Authority, against his protests, because of what they knew. This was the reason that Frank and Billy were killed. Paul tells Lionel that if he finds the document, he’ll find the truth.

On his way back to the agency, Lionel finds a key to a locker at Penn Station hidden inside Frank’s hat. He goes there and discovers Frank’s case notes and a deed inside the locker. The notes include Laura’s birth certificate, and it reveals that Moses is actually Laura’s father, not Paul. This is the document that Frank was negotiating about when he was killed. The deed includes a note from Frank to Lionel that this property has been signed over to him. Lionel takes the deed and leaves the rest in the locker, then goes to Paul to give him the key. As he leaves Paul’s apartment, Lionel runs into Tony. Over drinks at a nearby restaurant, Tony reveals that he has been trailing Lionel all along, and that he is working for Moses (that’s how he knew about the investigation). He also tells him to take Moses’ offer, because Laura is going to be killed next. Lionel tries to leave to protect Laura, but Tony tries to stop him. Lionel fights him off and quickly goes to Laura’s apartment. He stops her from entering it and they get away, but they are being chased by Moses’ goons. Fortunately, Laura is able to push one of them off of a fire escape. The other one has Lionel cornered, but the trumpet player who earlier rescued him is there and knocks out the other goon with his trumpet. Lionel then tells the trumpet player to drive Laura out of town for her safety.

Lionel goes to confront Moses, and he learns the truth from him. Many years ago, Moses raped a hotel employee, and nine months later gave birth to Laura. If that information was known, he’d be ruined. Paul forged Moses’ signature on the birth certificate because he’s a man of morals, and that’s why the two don’t get along anymore. Moses asks what Lionel wants, and he says to leave Laura alone or he will give the birth certificate to the press. Before leaving, Lionel tells Moses that Lieberman is on the take, and tell him, when you have him killed, that it’s for Frank. Moses then tells Lionel to tell Paul that he looked over his renovation plans and will approve them. However, the next day, Moses goes back on his word and denies the plans, purely out of spite. Later, Lionel mails the information about Lieberman to the reporter whose credentials he stole earlier. The movie ends at the property mentioned in the deed. The deed is for a house along the seashore. When Lionel arrives to check it out, he sees Laura there waiting for him. 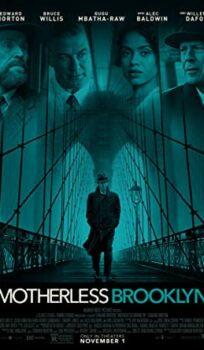