SHORT VERSION:
Dana and his fellow traffic school classmates manage to get their hands on a ledger detailing Deputy Halik’s and Judge Ferguson’s plan to sell the impounded cars of the students after they fail the course and get $50,000 for themselves after cheating the county out of half of the sales, and they head down to city hall to show it to Chief Fromm. Halik and Ferguson chase after them, but Dana and the students get to Fromm’s office seconds before they do and show him the ledger. The combination of this plus a convenience store clerk then coming in and correctly identifying Halik as the masked man who had robbed his store a couple of days earlier (which Halik did and framed Dana for out of spite) results in Fromm having Halik and Ferguson placed under arrest.

Later, Fromm personally awards Dana and the other students their traffic school graduation certificates, but as he leaves for home shortly afterward, he sees that Dana and the more prominent students featured in the film have already been pulled over by police and issued tickets again. The closing texts state that Dana got sentenced to traffic school five more times before the county, in desperation, made him the instructor. Now, no one fails the course.

LONG VERSION:
One night, Dana (John Murray) breaks into the impound lot with Spencer (Ben Mittleman), Wink (Ned Eisenberg), and Jeff (Willard Pugh) and steals his truck back so he can complete a task for an account he has the next day, but he and the others are spotted by Deputy Halik (James Keach) and Judge Henderson (Sally Kellerman). Halik decides to put an end to Dana, so he heads to Dana’s home/workplace, steals the truck himself, dons a ski mask, and commits an armed robbery at a convenience store so that way he’ll be seen leaving in the truck, which will be traced back to Dana and he’ll take the blame for it. His plan works, and after Dana gets arraigned by Henderson, Halik meets up with her in her chambers. After they kiss, Halik learns from her that, through selling the impounded cars of the traffic school students after he fails them and then cheating the county out of half of the sales, they will get over $50,000 to split between them. However, they are unaware that Halik’s girlfriend Deputy Morris (Lisa Hart Carroll) has spotted them kissing and eavesdropped on the whole conversation. Halik gives the students an impossible final test, and they predictably fail it.

As the students drown their sorrows with Dana at his home, Dana tells them that he wants to get some payback on Halik, so he heads to his house with Amy (Jennifer Tilly), Doc (Fred Willard), Loretta (Nedra Volz), and Spencer. As Halik and Henderson are fooling around inside, they tinker with Halik’s police cruiser to make it only go in reverse. Their work goes into the morning, and Deputy Morris stops by and catches them. However, she hears the noises Halik and Henderson are making inside, so she goes to the bedroom window and sees what is going on. Morris tells the quintet about Halik’s and Henderson’s plans for their cars, and points out the ledger resting on the nightstand and says that it contains all of the information on their whole scheme, and they must get it and show it to Chief Fromm (Robert Conrad) at city hall. The gang sends Loretta inside to get the ledger, and she succeeds, but she makes noise when she leaves that alerts Halik and Henderson. Morris steps in and starts fighting with the antagonists while the others get a head start on driving to city hall, with Halik and Henderson soon hot on their tail.

After a long chase, during which they draw the attention of a legion of cops in town for a convention, the five protagonists make it to city hall and head for Chief Fromm’s office with Halik and Henderson right behind them. The convenience store clerk who was robbed by Halik, who was there making a statement, also draws himself into the chase after noticing that Halik is wearing the same jacket the robber wore. The quintet get to Fromm and show him the ledger just as Halik and Henderson arrive, and then the clerk appears and fingers Halik as the one who robbed his store. Fromm has Halik and Henderson placed under arrest.

A short time later, Fromm personally issues traffic school graduation certificates to Dana and his classmates. Amy tells Dana that she is moving in with him, which he has no problem with, and they kiss before they leave to get her things. While Fromm is driving home soon after, he notices – to his embarrassment – that Dana, Amy, and the other students mentioned have been pulled over by the cops and issued tickets again. The closing texts state that Dana got sentenced to traffic school five more times before the county, in desperation, made him the instructor. Now, no one fails the course. 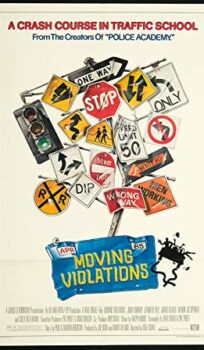