Pooper:
Mowgli kills Shere Khan in battle and allows the elephants to kill Lockwood. He then returns to the jungle to take up the mantle of jungle king.

Long Ending:
Shere Khan (voiced by Benedict Cumberbatch) begins slaughtering all humans living near the jungle. The panther Bagheera (voiced by Christian Bale) saves a human child named Mowgli as Shere Khan slaughters Mowgli’s parents. Bagheera, who is a member of a wolf pack, brings Mowgli to the wolf couple Nisha (voiced by Naomie Harris) and Vihaan (voiced by Eddie Marsan) who have just had a litter of cubs. Nisha and Vihaan ask the pack to adopt Mowgli as one of their own. Although debate is intense, pack leader Akela (voiced by Peter Mullan) convinces the pack to raise the “man cub.”

Time passes. Although some of the wolves accept the now teenaged Mowgli (Rohan Chand), most of the wolves still mock him as an outsider and freak. His best friend besides Bagheera is an albino wolf named Bhoot (voiced by Louis Ashbourne Serkis) who is also largely ostracized by the pack. Mowgli and the other young wolves receive training from another adopted pack member, a bear named Baloo (voiced by Andy Serkis). They are preparing to enter into an annual right of passage that, if they pass, allows them to hunt with the pack. Shere Khan returns to the jungle and threatens to attack the pack if they don’t give him Mowgli. Many wolves wish to accede to Shere Khan’s demands, but Akela convinces them to let Mowgli complete the right of passage to earn his spot amongst the wolves. The rite requires that all the wolves (and Mowgli) evade Bagheera’s pursuit. Baloo begins giving Mowgli extra training sessions and encourages to use his human traits to his benefit (such as swinging from trees and running on two legs).

Meanwhile, a nearby village hires a hunter named Lockwood (Matthew Rhys) to track and kill Shere Khan (who is brutally murdering their cattle). Mowgli observes the villagers, and one day witnesses fire burn one of Shere Khan’s minions.

Bagheera becomes convinced that the only way to truly protect Mowgli is to force him out of the jungle. The rite of passage begins and Mowgli not only manages to evade Bagheera’s initial attack, but takes the lead to cross the finish line first. Just before Mowgli reaches the end, Bagheera pounces on him, causing Mowgli to fail the test. It is clear that Bagheera specifically chose to take out Mowgli as he could just as easily have taken out any of the other wolves sprinting to the finish.

Mowgli runs angrily into the jungle and is captured by a group of monkeys that bring him to Shere Khan. The tiger approaches Mowgli and fights with Baloo and Bagheera when show up to rescue the boy. Mowgli is only rescued when the ancient giant python Kaa (voiced by Cate Blanchett) intervenes. Kaa explains that she has foreseen a future where Mowgli will speak before man and animal and saved him so she can witness what he will do. Angry at his failures and being captured, Mowgli later calls Bhoot a freak and causes Bhoot to run away in sadness. That night, Shere Khan convinces members of the wolf pack to challenge Akela for pack leader. Realizing Akela will ultimately be killed in he challenge, Mowgli grabs fire and uses it to end the challenge and chase away Shere Khan. Embarrassed by Mowgli interrupting the challenge and using man’s fire against the pack, Akela banishes Mowgli.

Mowgli is eventually captured by the local villagers. Ultimately, he comes to love being in their village, bonding with Lockwood and a mother-like figure named Messua (Freida Pinto). Lockwood asks Mowgli to join him in hunting Shere Khan, while one of Mowgli’s wolf brothers asks Mowgli to return as Shere Khan eventually deposed Akela and is wreaking havoc in the forest. Mowgli refuses to return to the jungle and seemingly embraces the life of the village. One night, however, Mowgli ventures into Lockwood’s personal quarters and learns that Lockwood is really a sport hunter (the laws of the Jungle state that any hunter for sport – like Shere Khan and now Lockwood – are the worst type of people as all life is sacred and shouldn’t be cavalierly taken). Amongst Lockwood’s trophy collection is a tusk from an ancient elephant residing in the jungle…. and Bhoot (likely killed after running away due to Mowgli’s insult). Mowgli weeps at the fate of his friend.

After much thought, Mowgli returns to the jungle. He tells the elephants he knows who took their leader’s tusk and they agree to help him fight Shere Khan. In exchange, Mowgli will deliver Lockwood to them. Mowgli also asks Akela (who still resides over a small group of loyal pack members, including Mowgli’s wolf parents and brothers, Baloo and Bagheera) for help, but is rebuffed.

Mowgli calls out Shere Khan at the edge of the village. The tiger arrives and is attacked by the elephants. The commotion attracts the villagers and Lockwood, who grabs his gun to try and shoot Shere Khan. Mowgli (armed with a knife) corners Shere Khan amongst the elephants and attacks him honorably in hand-to-paw combat (whereas Lockwood maintains his distance and shoots at Shere Khan with his gun). Shere Khan is fatally stabbed by Mowgli, but manages to pin the boy down. Before Shere Khan can deliver a killing blow, Akela and his pack attack and drive Shere Khan away. Akela is killed in the struggle, but not before apologizing to Mowgli. Lockwood takes aim at the animals, but is trampled by the elephants before he can fire. Mowgli then tracks Shere Khan into the jungle and honors the tiger’s spirit as Shere Khan dies. The villagers and jungle animals (including Kaa), having witnessed the struggle, realize that Mowgli now rules the jungle for both man and beast. Kaa narrates that so long as Mowgli lived, he ruled as king of the jungle and maintained peace between man and animal his entire life. 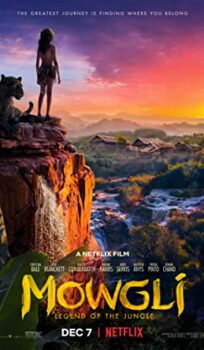