Larry (James Belushi) finds himself wishing for his old life back more and more when his problems in his new life keep mounting. These problems come to a head one night when Niles (Hart Bochner) kills Mr. Hansen (Bill McCutcheon) and frames Larry for it.

Larry escapes the cops and eventually heads to the bar where he first met Mike (Michael Caine), and drinks the Spilt Milk drink that Mike gave him that brought about this new life, thinking it could take him back to his old one. The cops then arrive outside, but just as he surrenders, the door opens to reveal the tow truck driver he called for earlier in the film. Mike then appears behind the bar, and Larry joyfully knows now that he’s back in his old life. He thanks Mike for everything, good and bad, and tells him that he’ll be happy with whatever he has planned for him for the rest of his life.

Larry goes inside and is given a surprise birthday party from Ellen (Linda Hamilton) and his friends. Eventually, Jackie (Jay O. Sanders) & Cindy Jo (Rene Russo) show up, and Jackie tells him that Niles & Lewis confessed to everything after he left, and that the board voted to give him Niles’ executive vice president job. Larry happily accepts.

The movie ends back on the night of the baseball game, where it turns out Larry actually met Mike after the game. Mike tells him everything will work out just fine, but Larry just says to himself “Old fart. What the hell does he know?” 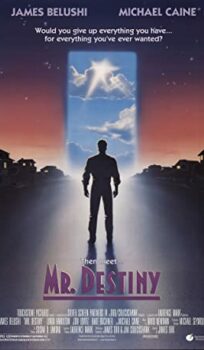