Thanks to his sight-deficient actions, both intentional and unintentional, and with some help from Waldo and Angus, Magoo recovers the Star of Kuristan ruby in the film’s finale in Brazil and helps get Luanne put behind bars. Along the way, he also helps to bring about the arrests of Ortega Peru, Austin Cloquet, and a bunch of other powerful criminals who all wanted to get their hands on the ruby for their own reasons.

Magoo returns the jewel to the museum and is cleared of all charges of being its thief, Waldo enters into a relationship with the Kuristani diplomat Stacey, and CIA Agent Anders and FBI Agent Stupak – who co-led the investigation into the ruby’s theft – co-author a successful novel about the whole case.

LONG VERSION:
While Luanne (Kelly Lynch) – going under the false name of Prunella Pagliachi – is at Magoo’s (Leslie Nielsen) house following a date they had, she tries to find the Star of Kuristan ruby after distracting Magoo with cooking something for her. Unbeknownst to her, her ex-partner Bob (Nick Chinlund) is there looking for it as well, as is the FBI Agent Stupak (Stephen Tobolowsky), who – along with CIA Agent Anders (Ernie Hudson) – believes that Magoo was the one who really stole the ruby. After Stupak takes some unintentional hits from Magoo, he heads back to the van Anders is stationed in on the street and tells him that they are both going in to arrest Magoo now. Meanwhile, Bob hides in the living room’s chimney when Waldo (Matt Keeslar) shows up to talk to his uncle about him possibly being the thief, having heard that suspicion from Stacey (Jennifer Garner), a Kuristani diplomat who is also his love interest.

Eventually, Luanne holds up Magoo at gunpoint and tells him to give her what she wants. Just then, Waldo appears with Magoo’s bulldog Angus, and Angus has the ruby in his mouth, which Magoo had mistaken for one of his toys. Magoo takes it and throws it over near the fireplace so Angus will fetch it for him, and seconds later, Bob suddenly falls out of the chimney. He scoops up the ruby and flees the house, and Luanne lies to Magoo and Waldo by saying that she is an FBI agent and Bob has stolen the Star of Kuristan. Bob finds his path blocked by the approaching Stupak and Anders, so he steals Magoo’s Studebaker and drives his way past the agents. Magoo, Waldo, and Luanne pursue Bob in Magoo’s Eggplant-mobile, but thanks to Magoo’s poor eyesight, they end up losing him. Luanne soon further explains that she has been working undercover and Bob is a jewel thief who works for Austin Cloquet (Malcolm McDowell). Cloquet will be holding a secret auction for the gem at a ski lodge in the Rocky Mountains tomorrow for every billionaire gangster in the world, although the most powerful of them all, Ortega Peru (Miguel Ferrer), won’t be there due to the fact that he is extremely reclusive. After Luanne says that the FBI needs someone to impersonate Ortega so they can get close to the gem and recover it, since no one has ever seen what he looks like, Magoo decides to volunteer for the job. Anders and Stupak find out where he is going and pursue him, with Stacey joining them.

The disguised Magoo makes his arrival on the mountain with the other crime lords in a ski gondola and gets taken to the lodge in a limousine, but as Luanne watches this from afar with Waldo and Angus, she suddenly betrays Waldo by dazing him with a kick, then follows the limo on a snowmobile. Anders, Stupak, and Stacey then appear in another gondola, and after they are misinformed by an attendant that Magoo is Ortega Peru, Stupak remarks that they are going to need backup. Cloquet shows Magoo and the other gangsters the Star while they are lounging in the pool in the solarium, but as Magoo gets a hold of it and inspects it, he fails to notice that his drawn-on chest tattoo is washing off in the water, and then Cloquet draws his Ortega disguise onto Magoo’s picture, which is in an article in a newspaper that he is holding. He exposes Magoo, but just as Bob readies his gun to shoot him, Luanne – having disguised herself as one of the bikini-clad women entertaining the criminals – knocks down Bob and takes his gun, then demands for Magoo to hand over the jewel. Luanne knocks Cloquet out when he tries to interfere and then orders the gangsters and the other women to make tracks.

Waldo appears with Angus moments later and tells Magoo that Luanne is no federal agent, and Luanne finally admits about as much to Magoo in addition to the fact that she was feigning romantic interest in him. Disappointed, he gives her the ruby, but before she can shoot him, Bob gets back up and wrestles her for the gun until she kicks him into the pool and runs away. The FBI and CIA then burst into the lodge and collar Cloquet, the crime bosses, and their men, but Bob escapes. Luanne speeds off down the mountain on her snowmobile, and Bob sees her go and – despite still being soaking wet – pursues her on skis while Magoo follows on an ironing board and Waldo and Angus on another snowmobile. Luanne ends up making a successful getaway, and Magoo and Waldo escape before the FBI and CIA can catch up to them, but Bob gets captured thanks to the exposure to the cold leaving him virtually frozen stiff. After all of this, Anders, Stupak, and Stacey now believe that Magoo and Luanne are partners in the gem’s theft.

Luanne telephones the real Ortega Peru from a hotel in town while disguised as an old woman, telling him that she has the Star of Kuristan and will give it to him for $15 million, and they agree to make the deal tomorrow at his wedding to his fiancée Rosita (Monique Rusu) at his villa in Rio de Janeiro. Magoo and Waldo then show up at the hotel wearing bellhop costumes, and Waldo goes inside to try to find out if Luanne is registered here while Magoo posts himself at the door with Angus. However, Waldo’s cover gets blown by a staff member, plus he and Magoo fail to spot the disguised Luanne as she makes her way out of the hotel to get a limo to the airport. However, Angus is not fooled by her disguise and tears away at her purse until it comes undone when Magoo and Waldo pull him away, after which she grabs some of her belongings and runs. However, Magoo and Waldo notice that she forgot to take a receipt for an airline ticket to Brazil that she purchased under her Prunella alias, and they soon realize that they just let Luanne slip through their fingers. Magoo deduces that she must be going to see Ortega to get more money for the jewel, so he, Waldo, and Angus head for Rio de Janeiro.

Somehow, they find Ortega’s villa and sneak onto the property, and Ortega is informed of Luanne’s arrival by one of his henchmen. Ortega tells him that, once he has the ruby and he and Rosita leave for their honeymoon, Luanne must be killed quietly. He then meets with Luanne inside one of the wedding tents and they do the transfer, and he tells her to stick around until after the wedding so his men can count all of the cash for her (which is stored in layers of nylon clothing). As Waldo is sneaking around outside of the same tent, he gets caught by Ortega’s men, and Magoo accidentally finds his way into Rosita’s bridal suite and takes her by surprise, frightening her so badly that she faints. He then gets the idea of masquerading as Rosita in her wedding dress in order to get close to Ortega. Shortly afterwards, Luanne rightly gets the feeling that Ortega has ordered her death when more of his goons appear near her, so she fights them and knocks them all out before putting on the cash-filled clothes.

The veiled Magoo does the pre-marriage routine with Ortega, and when Ortega presents the Star to him, Magoo reveals himself, snatches the ruby, and flees. He soon finds Waldo tied up to a rope and pulley system and hanging above the enclosure of Ortega’s savage pet mandrill, and Ortega then shows up and demands that Magoo hand over the gem in exchange for him not untying the anchoring knot. Magoo complies, but after he grabs hold of the rope, Ortega undoes the knot anyway, leaving Magoo to try to keep Waldo away from the mandrill while Ortega makes his escape. The FBI, CIA, and the city’s police force then come in, and Magoo gets Waldo to safety with Angus’ help before they pursue Ortega. Anders and Stupak spot them running away and go after them. Ortega tries to take off in a hidden helicopter, but Luanne appears and holds him up at gunpoint, demanding that he take her along. Magoo, Waldo, and Angus then arrive, and Magoo jumps into the chopper just as it lifts off, after which Anders and Stupak show up. After they watch the chopper fly away, they take away Waldo and Angus while Anders also tells a Brazilian cop that came with them to call for a helicopter to chase after them.

Luanne and Ortega quickly get into a scuffle for possession of both Luanne’s gun and the Star of Kuristan as they fly over a river, but Magoo manages to pluck the stone from Luanne’s grasp, and Ortega then accidentally causes Luanne to shoot the control panel, killing the chopper’s engine. Magoo steps out and falls straight down into the river, and Luanne dazes Ortega and heads down after Magoo. Two police choppers then appear, and one follows Ortega’s chopper until it crash-lands (after which Ortega is arrested off-screen) while the other hovers above Magoo and Luanne and drops down an inflatable raft for them to get into. The cops tell them that they will also be dropping down a harness for them to hook onto the raft so they can pull them to safety, then they warn them about an enormous waterfall lying ahead. Thanks once again to his poor vision, Magoo hooks the harness onto Luanne instead of the raft, and he signals for the chopper to pull, causing Luanne to get lifted out and away. The raft then goes over the waterfall, but Magoo flips it upside down and hangs onto it, turning it into a makeshift hang glider that enables him to float down until he safely lands in a tourist boat. Luanne is apprehended by Anders and Stupak on the ground.

Magoo is cleared of all charges, and he returns the Star of Kuristan to its display case at the museum, with Waldo, Angus, Stacey, Anders, Stupak, and the museum staff on hand to witness it. Waldo gets to chatting with Stacey and informs her that he has become the head of security for his uncle’s company, and Stacey replies that this probably means that he won’t follow her to Kuristan. He tells her that he’d do it in a heartbeat, but she says with delight that he won’t have to because she likes living here much better, and they give each other a loving hug. Anders and Stupak – having co-authored a book about the whole case and gotten it adapted into a TV movie – approach Magoo and first apologize for all of the trouble that they have put him through before asking him to autograph a copy of their book, but he fails to put his signature on it properly. Magoo and Angus then wander off in the direction of home, but due to his bad eyesight, Magoo just gets himself into another dangerous predicament. 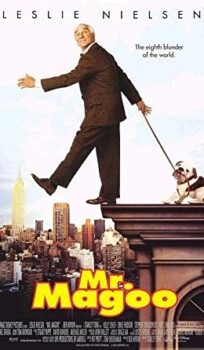