Nemo Nobody (Jared Leto), the last mortal on Earth, is asked to remember his life. He gives contradictory accounts and it is quickly revealed that what’s unfolding through the film is not one, but all the possible lives he could have led. Plus: scenes from the sci-fi novel he wrote (in at least one of his lives, bear with me for a second).

His indecisiveness about which life is it anyway comes from his childhood: when his parents (Rhys Ifans & Natasha Little) divorced, he had to choose between them, and he’s now forever thinking about the choice he made that fateful day and its ramifications on his life.

He was married to Jean (Linh Dan Pham); or he fell in love with his step-sister Anna (Diane Kruger); or again he could have been married to bonkers Elise (Sarah Polley) who died in a freak accident that left Nemo scarred physically and emotionally for (one of his) life; or Anna wasn’t his step-sister at all. In several cases, he died prematurely. In his science fiction story, he’s in a space station that blows up.

The film later, following its hero’s lead, gives several contradictory solution for this puzzle. It could just be happening in 9-year-old Nemo’s head as he’s trying to choose between his parents and reviews all the possible futures. Or, everything happened and whenever Nemo Nobody reaches the end of his life, it basically reboots (think: Groundhog life) and he actually got to live all of the above, including one life where his parents never sepatated at all (or is that a fantasy?).

As the film closes, time starts running backwards and it’s implied that Nemo will have another shot at existence. Maybe. 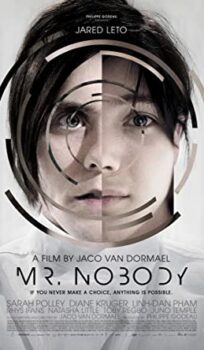