Long Ending:
Inteltrax corporation’s director, Z, injects several cyborgs with the drug Euphoron. This causes them to mutate into psycho-sexual killing machines. Scientist siblings Darla and Paul attempt to stop Z, but Paul is captured and detained while Darla flees. Meanwhile, Z’s former partner, the drug-addled Domina, covertly watches events unfold. Domina is addicted to Euphoron and has realized that Z has cornered almost the entire market of the drug.

Darla tracks down mercenary Matt Riker (Rick Gianasi) and several Inteltrax cyborgs attack. Matt defeats them, as well as one of the mutants who had also followed Darla. Riker agrees to help Darla defeat the mutants and rescue Paul. He recruits fellow mercenaries Elaine Eliot (Taunie Vrenan) and Johnny Felix (Ron Reynaldi) to help. Meanwhile, Domina agrees to help Z fight the mercenaries in exchange for several crates of Euphoron.

Johnny and Riker split up and track down the remaining two mutants, eventually finding and defeating them (though not until after the mutants have killed several innocents).  Meanwhile, Elaine goes undercover to infiltrate Inteltrax’s warehouses. The original mutant re-assembles itself and kidnaps Darla and take her back to Inteltrax. Darla learns that the mutant is actually in pain and is simply seeking her and Paul’s help to reverse his mutation.

Meanwhile, Z explains to Paul that he intends to inject all of his cyborgs with Euphoron and then sell the violent mutants to warlords across the globe. At that point, Riker, Johnny, the mutant and Darla all confront Z. Meanwhile, Elaine detonates bombs she had planted in the warehouse, destroying the building and the Euphoron inside. When the mutant learns the process is irreversible, he brutally beats Z.

At that point, Domina shows up with an even more advanced model of cyborg that is fully powered by Euphoron. Her cyborg beats up the mutant and fights with Riker. Though Domina’s cyborg gets the upper hand, Darla finds a laser gun and manages to shoot and kill the cyborg. Domina escapes and the heroes begin to leave when Z takes the discarded laser gun and shoots at the group. Riker then turns around and shoots Z, killing him and ensuring that Inteltrax will crumble. 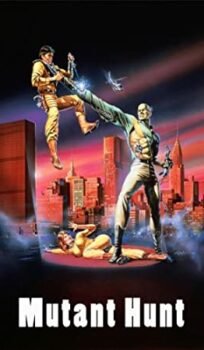