In the war of 1812, an American ship must break the British blockade to bring back $10 million in gold needed for the war from France.

Capt. Marshall hires Capt. Waldridge as his 1st officer.  As a former British naval captain, Waldridge knows the British tactics, but his loyalty is suspect.  When they load the gold in France, that also bring on Waldridge’s greedy ladyfriend, Leslie (Angela Lansbury).

Leslie pushes Waldridge to mutiny and steal the gold. Waldridge reveals that he had to flee England after he stole his ship’s payroll to finance Leslie’s extravagant demands.  Waldridge falls overboard, and Marshall jumps in to save his life.  Waldridge brought on several crew of his own, for the purpose of mutiny.  Now, Waldridge no longer wants to mutiny, but the others won’t give up their dream of gold.

When the ship nears America, they carry out the mutiny. Marshall and the loyal crew are taken prisoner. Leslie, and the mutineers, press Waldridge to kill Marshall.  Waldridge pretends to shoot Marshall, but lets him jump out through a porthole, miles from shore.  Marshall makes it to shore, and recruits an American warship to pursue Waldridge.  Waldridge tries to enforce discipline among the mutineers, but they are frequently drunk and fighting.

Marshall and the American navy capture the ship back from Waldridge.  Leslie shoots herself, rather than spend the rest of her life in jail.  The British blockaders come after them.  Waldridge suggests they use an experimental wooden submarine.  With it, they successfully sink the British ship.  Marshall regains command of his ship.  In the official report, they say Waldridge died in battle, so he is free to start a new life.

Note: This is completely false historically, as the first submarine to sink a ship was the Huntley, in 1864. 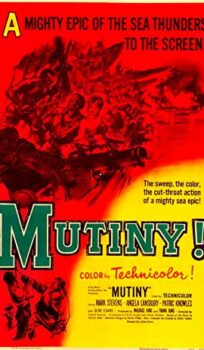