SHORT VERSION:
Jeremy, Darla, and Ralph get into a climactic confrontation with McCarthy and Grimsdyke at a cemetery, and though Jeremy tells McCarthy that he doesn’t want to hurt him and will let him go freely, McCarthy utterly refuses to listen to him. Nora – the vampiress who turned Jeremy – and Modoc then show up to assist Jeremy, and after McCarthy attempts to kill Modoc and fails, Modoc summons forth some vampiresses, and they proceed to turn McCarthy into a vampire (Modoc figured that there was no better way to vanquish an enemy than to make them an ally).

McCarthy quickly comes to like his change in physiology, so he says goodbye to Grimsdyke, telling him that he is going to run with Modoc and his companions for a while. Modoc asks Jeremy to come join him, saying that he’d be among friends, but Jeremy declines, wanting to focus on school and his relationship with Darla. Modoc bids him farewell, and he and his vampire friends then depart for parts unknown. When Grimsdyke attempts to finish McCarthy’s work, Ralph gives him a simple scare, sending him running like a frightened little girl into his van, and he speeds off.

Jeremy’s parents then show up, and he introduces them to Darla, which delightfully surprises them because they thought that he was gay, based on his peculiar behavior.

LONG VERSION:
As Jeremy (Robert Sean Leonard) and Ralph (Evan Mirand) are out at a rock club so Jeremy can seduce a woman into getting intimate with Ralph, McCarthy (David Warner) and Grimsdyke (Paul Willson) – who had followed the duo there under the assumption that Ralph is the vampire they’re after – appear and try to attack Ralph, but Ralph gets away from them, and he and Jeremy dash out of the place and drive off in Jeremy’s car. The hunters waste virtually no time in following them.

The guys go into a diner to try to hide amongst the patrons, but Jeremy notices Darla (Cheryl Pollak) is there with her friends, and wanting a second chance with her, he goes over and talks to her. As he is distracted with her, McCarthy and Grimsdyke show up and force Ralph to come quietly with them. Jeremy succeeds in winning Darla over, but when he notices that Ralph is gone, Darla’s friend Gloria (Erica Zeitlin) tells him that he left with two guys, and points out McCarthy’s departing van. Alarmed, Jeremy takes Darla and pursues the hunters in his car.

The chase draws the attention of the police, and Jeremy ends up crashing his car. The cops get him and Darla out of the wreck, and though Jeremy tries to explain to them the predicament that Ralph is in, they just believe that he is a drunk driver and stick him in the back seat of one of the police cruisers while Darla is put in the front passenger seat. Seeing their chance to continue the pursuit, Darla gets behind the wheel and takes off. Jeremy soon radios all the cops about the van’s model and make and what direction it is heading towards, and he then radios his parents – who keep a police radio and thus have heard what has gone down thus far – at home to tell them of his need to steal the police car so he could save Ralph. His parents immediately leave the house and drive off in the direction of the van.

McCarthy and Grimsdyke stop at a church so they can release Ralph’s soul on sanctified ground. They bind him down to the altar, but just before McCarthy can stake him through the heart, Jeremy arrives and orders them to stop, and he then has McCarthy prove to himself that Ralph is not a vampire. Ralph is set free, but then he goes to hug Jeremy, forgetting about the garlic necklace that McCarthy had just put around his neck. The touch of the garlic causes Jeremy to yell in pain, exposing him as the vampire. He, Darla, and Ralph hightail it out of the church into the adjoining cemetery, with the hunters right behind them.

McCarthy and Grimsdyke catch up with them, but Jeremy is able to stop McCarthy from trying to attack them. He tells him that he has no desire to harm or kill him and will let him go freely, but McCarthy is so hell-bent on killing all vampires that he refuses to listen to him. Just then, Nora (Cecilia Peck) – the vampiress who turned Jeremy and who was presumed to have been killed by McCarthy earlier in the movie – shows up to make the save, followed by Modoc (Rene Auberjonois). Modoc tries to reason with McCarthy that he is not his enemy, but after McCarthy attempts to kill him with silver bullets (which fail to work, because – in this film – silver bullets only work on dispatching werewolves), Modoc summons forth some vampiresses, and they take McCarthy away for a few moments. When he comes back, everyone sees that he has been turned into a vampire (Modoc figured that the best way to vanquish an enemy was to make them an ally).

Quickly coming to like his change in physiology, McCarthy says goodbye to Grimsdyke, telling him that he is going to run with Modoc and his companions for a while. As approaching police sirens are heard, Modoc tells Jeremy that that is his cue to leave, and asks if he would like to join him and his crew, saying he’d be among friends. Jeremy politely declines, saying that he has school tomorrow and already has some friends right here. Modoc bids him farewell, and he, McCarthy, and the vampiresses transform into wolves and run off into the night (but not before Ralph gives one of the vampiresses his phone number). As the three teens leave the cemetery, Grimsdyke silently follows behind them, looking to try to finish McCarthy’s work. Ralph ends up giving him a simple scare, sending him running like a frightened little girl into his van. As he speeds away, he gets chased by some arriving police cruisers.

Jeremy’s parents then show up, and he introduces Darla to them. They are delightfully surprised at this, because they had come to the conclusion that he was gay, based on his peculiar behavior. 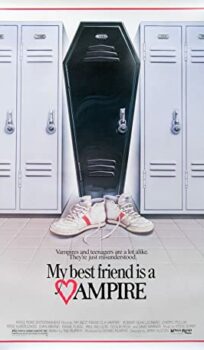