Toula’s (Nia Vardalos) father Gus (Michael Constantine), during an ancestry search to prove that he’s related to Alexander the Great, discovers that the priest never signed his marriage certificate to Toula’s mother Maria (Lainie Kazan). Gus insists that they go to the priest at their Greek Church to make it official but Maria refuses because she wants Gus to propose the right way.

Toula’s marriage to Ian (John Corbett ) has hit a rut because she’s been focused more on their daughter Paris. Paris wants to apply to colleges out of state because she feels suffocated by her Greek family because they’re always getting into her business, especially Gus constantly telling her to get a Greek boyfriend. She wants her independence. which has devastated Toula.

Gus’ hip locks while in the bath tub and an ambulance is called. Maria refuses to go because only family members are allowed. While being wheeled out, Gus pleads for her to marry him again. This time she accepts.The whole family pitches in to help plan the wedding

Paris has been accepted to Northwestern University in Chicago and NYU in New York City. She chooses Northwestern to please her mother, but Paris’ great-grandmother convinces her she should go to New York. Paris asks Bennett (Alex Wolff), a boy she has a crush on, to the prom. He is also Greek with an equally crazy Greek family. Prom is the same night as the wedding. Toula tells Paris she can go to the prom if she attends the reception later. En route to the church, Gus arrives drunk after many shots of ouzo. Maria storms off  after seeing Gus acting foolishly, feeling he is not taking the wedding seriously. Gus’s estranged brother, Panos, tells Maria that Gus had confided to him his love for Maria, and the ceremony continues. Watching as Gus and Maria recite their vows, Ian and Toula privately renew theirs. At the prom, Paris and Bennett share their first kiss while slow-dancing.

At the wedding reception, Gus reads a letter from the ancestry site verifying that he is a descendant of Alexander the Great. Ian, however, realizes that Toula forged the letter to make her father happy. The movie ends with the entire family dropping Paris off at her college dorm in New York. 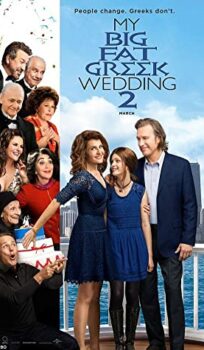