Harry Warden is not the killer.  When Chief Newby finally hears back from the mental hospital where Warden had been institutionalized, he learns that Warden has been dead for 5 years.  In the mines, Axel (Neil Affleck) is revealed to be the real killer behind the mask.  Axel hates Valentine’s Day just as much as Harry Warden did because his father, one of the supervisors Warden blamed for the cave-in, was killed by Warden one year after the accident — on Valentine’s Day, right in front of an impressionable young Axel.

Axel escapes the police during a cave-in, but loses his hand in the process.  He disappears into the darkness of the mine, laughing maniacally and asking Sarah (Lori Hallier) to be his ‘bloody Valentine’.  Chief Newby escorts Sarah and Paul (Jessie Hanniger) back to the surface. 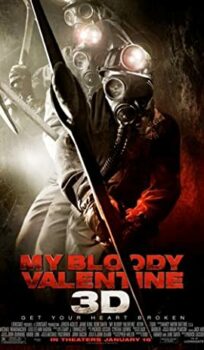