Frank (Leslie Nielsen) prevents the Queen of England to be assassinated by Reggie Jackson, who had been sensorially hypnotized by Vincent Ludwig (Ricardo Montalbán) to carry out that assignment.  As people cheer for it, Ludwig takes Jane (Priscilla Presley) away; nonetheless, Frank catches up with them and, just as Ludwig is about to kill Frank, Jane bites him and Frank shoots him with a stunning dart.  This makes him lose balance and fall off the balcony, to his death.  Frank and Ed (George Kennedy) come to watch, as Ludwig’s dead body is stumped by a bus, and then squashed by a road roller.

Then, one of the members of a passing marching band accidentally steps on the hypnotizing device, which gets activated upon Jane, and she grabs the gun and aims at Frank.  Frank gives Jane a speech about how his love for her makes him feel, and also gives her an engagement ring; this is all witnessed by everybody else at the stadium, by means of a big screen.  The hypnosis is broken, Jane and Frank embrace and kiss, and this moves the rest of the public (and the ballplayers, who had been fighting), and everyone ends up forgiving each other.

To top things up, The Mayor (Nancy Marchand) comes over, apologizes to Frank, and asks him to return to the Force, promoted to Captain; also, Nordberg (O.J. Simpson), still in a wheelchair, comes by to greet Frank; then Frank greets him by slapping him HARD in the back, which causes the wheelchair to tumble down the staircase of the bleachers; and just as Jane proclaims: “Oh, Frank.  Everyone should have a friend like you!”, we see the wheelchair bump into the end of the staircase and Nordberg is jolted off, to the air. 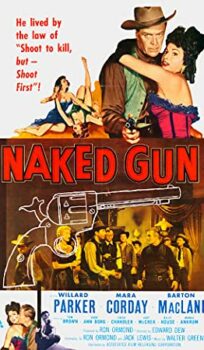