Short Version
Walley World is closed, causing Clark to take a security guard hostage and force him to let them in. The owner finds out, but when he realises the misery the family suffered getting there he drops the charges and lets them enjoy the park anyway.

Long Version
Clark Griswold (Chevy Chase) is looking forward to taking a cross-country trip from Chicago to California to visit the famous Walley World theme park with his wife Ellen (Beverly D’Angelo), son Rusty (Anthony Michael Hall) and daughter Audrey (Dana Barron). Things go wrong even before they start when Clark attempts to trade in his old car for a new one only to end up lumbered with an ugly over-sized station wagon. Regardless, the family start out optimistic about their trip but quickly begin to suffer numerous mishaps along the way. They stay with Ellen’s cousin Eddie (Randy Quaid) and his family only for them to foist their mean-spirited Aunt Edna (Imogene Coca) and her unfriendly dog Dinky on them, asking them to drop her off with her son in Phoenix. Meanwhile, Clark becomes enamoured with a blonde woman (Christie Brinkley) driving a Ferrari he keeps encountering on the road.

After a night at a filthy campsite, the family set off however Clark forgets to untie Dinky from the bumpy before driving away, accidentally killing the dog. Ellen then loses her credit cards so Clark has to cash a cheque, and later Clark accidentally crashes the car in the desert and (following him getting lost in the desert) has the rest of his money extorted from him by the mechanic. When the family gets to the Grand Canyon, Clark is forced to steal money from the hotel cash register when the clerk refuses to cash a cheque. Just when it seems like things couldn’t get any worse, Aunt Edna passes away in her sleep and Clark ties her to the roof when the kids refuse to sit in the back with a dead body. They reach Edna’s son only to discover he’s out of town, so the family leave her body with a note in the backyard.

At this point, while Clark is still eager to continue the trip the rest of the family are sick of the vacation and just want to go home. Clark begins to lose his marbles, and he verbally abuses his family telling them they’re going to have a great vacation even if it kills them. Ellen tells him off for this later, and when Clark commiserates in the bar the blonde woman he’s kept on seeing joins him. The two hit it off and decide to go skinny-dipping in the pool, but Clark (who is still wearing underwear) yells out upon jumping in the cold water waking the entire hotel. He goes up to Ellen and apologises. She forgives him and the two decide to go skinny-dipping together.

The family finally reach Walley World only to discover the park is closed for cleaning and repairing. This causes Clark to completely lose his mind, and he buys a realistic looking BB gun with which he holds up the security guard (John Candy) and forces him to let them use the rides. A SWAT team arrives and holds the family at gunpoint just as the park’s owner Roy Walley (Eddie Bracken) arrives. Clark tells Roy about all the misfortunes, misery and mishaps they went through getting to Walley World, and Roy decides not to press charges but allow the family to use the park as his guests for the day. As a result the Griswolds, Roy, the security guards and the SWAT team have a wonderful day enjoying the park. 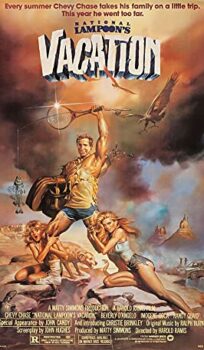