After traveling all the way from Billings, Montana to Lincoln, Nebraska (with a stop in his childhood hometown and multiple trips to the hospital along the way),

Woody (Bruce Dern) learns he did not, in fact, win one million dollars (which every other character realized along the way). Instead, he receives a free hat that says “Prize Winner”.

David (Will Forte), his son who drove him there, however, buys a truck and new air compressor for Woody, which he has been saying all movie he wanted to buy with his winnings.

David lets Woody, who hasn’t been able to drive in years, drive once through his hometown wearing the hat, leading everyone to believe he actually did win the money. 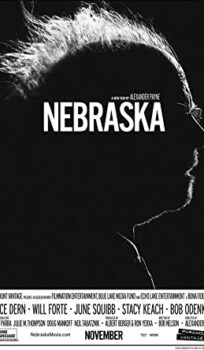