Set in Texas in 1870, Captain Jefferson Kidd (Tom Hanks) is a former Confederate officer who makes his living traveling from town to town reading the news to the local population for 10 cents a person. While traveling to his next destination, Captain Kidd finds an overturned wagon and the lynched body of a black man. He also finds a young white girl (Helena Zengel) dressed in Native clothes. In the remains of the wagon, Kidd finds a note from the Bureau of Indian Affairs saying that the girl, whose name is Johanna Leonberger, was kidnapped at a young age by the Kiowa. The Kiowa was defeated by Union soldiers and she was rescued by them. Johanna was in the process of being returned to her family in the central Texas town of Castroville, and the lynched man was in charge of returning her. Kidd takes Johanna, who only speaks Kiowa, to a nearby BIA office, but the local representative is on the reservation and won’t return for three months. So Captain Kidd decides to take Johanna to Castroville, which is several weeks away by wagon.

Even though Kidd knows some Kiowa, communication between him and Johanna is limited. But during their travels, the pair bond over self-preservation, first from former Rebel soldiers who want to buy Johanna to sexually traffic her, then from a town whose leader wants to “cleanse” the land of outsiders. Kidd is also teaching her English, and at the same time, she is teaching him Kiowa. By the time the duo reaches Castroville, Kidd begins to treat Johanna like his daughter, but he also knows that she is better off with her actual family. That family is her aunt and uncle, who tell Kidd that Johanna’s parents moved to Indian country because the land was cheaper and that they and Johanna’s sister were killed by the Kiowa. Kidd then leaves Johanna with her aunt and uncle, but it’s obvious she’d rather stay with the Captain.

Kidd then travels to nearby San Antonio, where he and his wife Maria lived before the war. He learned she died of cholera while he was fighting in the war, and he never returned to San Antonio after it ended. Kidd visits her grave and tearfully says goodbye to her, leaving his wedding ring next to her gravestone. He then returns to Castroville to see Johanna again, only to find her tied to a post. The aunt and uncle say she keeps running away and refuses to work. Kidd then goes to Johanna and apologizes for leaving her, and says she’s coming with him. The aunt and uncle are sad to see her go, but they know that the Captain can take better care of her than they could. The movie ends with Captain Kidd in another town reading the news, and Johanna, now going by Johanna Kidd, does sound effects while he reads. 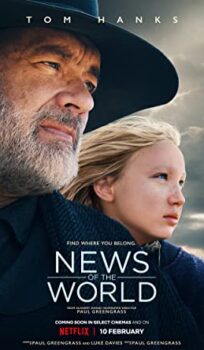